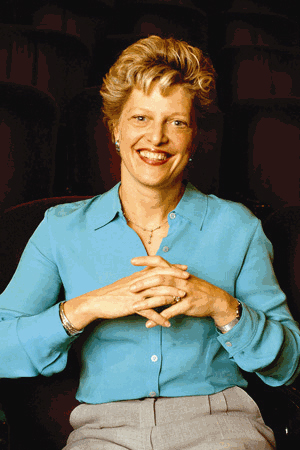 Carey Perloff was born in Washington, DC, the daughter of Joseph Perloff, a pediatric cardiologist from New Orleans, and Marjorie Perloff, a literary critic and Austrian refugee. Her dream from a young age was to become an archaeologist and discover the next Troy; this led her to study ancient Greek at Stanford and then to migrate to the theater, where she first learned to direct by staging Greek tragedies outdoors while studying theatrical modernism with Martin Esslin. She graduated Phi Beta Kappa in classics and comparative literature in 1980, went on a Fulbright Fellowship to Oxford—where she met her British husband, Anthony Giles—fell in love with the work of Harold Pinter and Samuel Beckett, and moved to New York to begin her directing career.  At age twenty-seven, she was hired to run Classic Stage Company, which she saved from financial ruin by staging vigorous productions of unusual classics and new work with major actors, including the American premieres of Pinter's Mountain Language and Tony Harrison’s Phaedra Britannica, the world premiere of Ezra Pound’s Elektra, and many others. Perloff was the youngest person ever to be hired to run a major LORT theater when A.C.T. chose her in 1992 to become its third artistic director. She took over a ruined building and a demoralized and broke institution and set about bringing it back to life. She’s had deep collaborations with Tom Stoppard, Philip Kan Gotanda, Robert Wilson, Frank Galati, and Timberlake Wertenbaker; with major actors such as Bill Irwin, David Strathairn, BD Wong, and Olympia Dukakis; and with other notable artists from around the world, making A.C.T. a true destination for passionate, literate, and diverse theater. In addition, Perloff has written a number of award-winning plays, including Luminescence Dating, Higher, and Kinship; has taught for many years in A.C.T.’s acclaimed M.F.A. Program and at universities around the country; and has directed dozens of major reinterpretations of classical plays, from Hecuba to ’Tis Pity She’s a Whore, as well as world premieres of new work. She helped rebuild A.C.T.’s Geary Theater after it suffered massive damage in the 1989 Loma Prieta earthquake and is now involved in opening The Strand, a new performing venue and a long-dreamed-of second stage for A.C.T. Perloff writes and lectures regularly about the American theater and about issues in culture and contemporary life that are close to her heart. She and her husband have two children: Alexandra, who graduated from Harvard in art history and worked in Paris for three years before attending Yale Law School, and Nicholas, who attends Columbia University and is perhaps best known as the electronic music producer Flaxo.

1996 Drama-Logue Award for Best Production for The Rose Tattoo (A.C.T.)

1997 Jujamcyn Theaters Award to A.C.T. for outstanding contribution to the development of creative talent for the theater