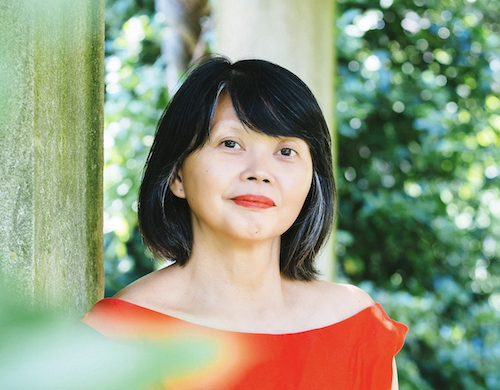 Gina Apostol is the author of the novels Insurrecto, Gun Dealers’ Daughter, and The Revolution According to Raymundo Mata. She is the recipient of a PEN/Open Book Award and two Philippine National Book Awards. Her essays and stories have appeared in The New York Times, Los Angeles Review of Books, Foreign Policy, Gettysburg Review, and Massachusetts Review. She lives in New York City and western Massachusetts and grew up in Tacloban, Leyte, in the Philippines. She teaches at the Fieldston School in New York City. Her newest book is Bibliolepsy, published by Soho Press.

A yellow couch in Manhattan!

For this book specifically—the great Brazilian writer, grandson of freed slaves, and minor bureaucrat who fascinatingly lived a very dull life—Joaquim Maria Machado de Assis. At the time I was reading him a lot. I even have copies of different translations of his masterpiece Dom Casmurro because I have these bookstore rules so I don’t go crazy buying up everything in the store—one rule is I always have an author’s name that I look for first. For a long time, I always looked first for Machado de Assis (which meant I had bonus letters to look up: not just M but also D and A), and every time I saw a new translation, I’d buy it. The other author I kept doing this to was Bohumil Hrabal—I have not gotten over the beauty of Too Loud a Solitude. I have too many editions of that, too.

After reading early drafts of Bibliolepsy, my teacher at the time, John Barth, told me I should read Dom Casmurro. When Soho Press’s book designer asked me how Bibliolepsy should look, even so many decades later I told her—check out the chapter formatting of Casmurro, my book should look like that! He was born in the 1830s and was way ahead of his time. He plots like a postmodernist with swift, happily arbitrary shifts in scenery and time, he jokes like a philosopher, having a fabulously melancholic, erudite wit, and he clearly has fun with his art. Which, to be honest, is what I mainly wish to do—have fun writing a book. None of his characters were very likable. They were all excellent neurotics. I felt free to have delicious malice, reading Machado de Assis. A kindred soul. Another of his titles was Philosopher, or Dog? I’ve read everything of his translated into English at this point.

I’ve just finished Baldwin’s The Devil Finds Work—everyone should just read anything by Baldwin, as we know. Anyway, I love books about artists talking about art—those book-length interviews of Hitchcock or Godard, for instance. I think I enjoy Hitchcock talking about his movies more than I enjoy actually watching Hitchcock’s movies. One of my favorite books remains the sound and film editor Walter Murch’s In the Blink of an Eye: A Perspective on Film Editing—which was my Bible while writing Insurrecto.

In The Devil Finds Work, Baldwin talks about the experience of watching white actors on film as a black child. I never thought about the whiteness of characters when I was a biblioleptic, book-devouring kid—I never thought of Little Women or Dostoevsky’s or Laura Ingalls Wilder’s writing as not having my body in it. Growing up in the Philippines, I unconsciously centered my body in all the books I read. And I guess reading Baldwin—and publishing Bibliolepsy now, in our time—makes me want to go back and think of that phenomenological thing: to articulate the fascinating layers of how a brown child reads in the Western world. I mean, the ways we assert and insert our bodies in everything. My experience of reading was this kind of hubristic identification that gave those books their relevance and their charge.

Tacloban, my hometown, on the island of Leyte, a kind of historic but sadly very boring place, had no bookstore when I was growing up—though my mom once bought me a graphic novel of Crime and Punishment from the Daughters of Saint Paul, which really sold rosaries. I have no business sense, so I can never open a bookstore. But a bookstore in Tacloban is a good dream. I’d call it Prospero—after my character Primi’s father and, ah yes, that obscure magus in The Tempest. He was a man on an island with a hoard of books.

Its bestseller, hello, should be Bibliolepsy because so many of my books, including Bibliolepsy, are set in one way or another in Tacloban—they better buy it! It’s odd that both MacArthur in 1944 and that first colonizer Magellan in 1521 landed on or around Tacloban because nothing ever happened there when I was a kid. Except, of course, weird visits by Imelda Marcos—she was from my hometown and had gone to my school. The goddamned Rose of Tacloban. Every so often we kids, like good dutiful children of dictatorship, would dance for her upon her arrival on the airport tarmac. She was a curse.

In my bookstore dream, Imelda would never visit my store because she would already have been executed for her crimes—justice would already have been done. Sadly, she’s still alive. She never even went to jail. Her son, a dimwit accurately and onomatopoeically named Bong-bong, might become president next year, thanks to his family’s stolen billions, his huge bank of Internet trolls, and the dumbass people who like dictators. It does hurt that that dream of revolt, which is the backdrop of Bibliolepsy, becomes a mirage, as Primi predicted, and I wished it were not. My novel, written so long ago, is set in that time when Filipinos kicked out their dictator in 1986. Maybe it’s not ironic but predictable that the novel comes out in the U.S. now, when the dictator’s zombie family is making its comeback.

The message of Filipinos to Americans: beware when justice is not done to those who wreck your democracy. Bad things return. Maybe, instead, my store’s bestseller should be about some zombie apocalypse.