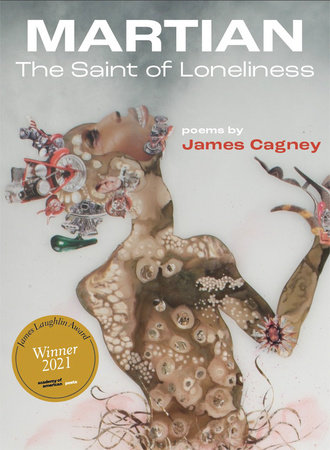 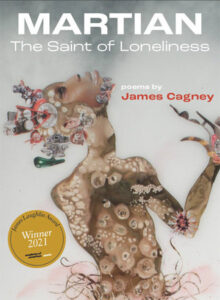 James Cagney celebrates the publication of

Martian: The Saint of Loneliness

Winner of the 2021 Academy of American Poets James Laughlin Award

American history got you down? Are you feeling alienated? Join poet James Cagney in his blistering second collection, Martian: The Saint of Loneliness, as he journeys through time, space, and memory with caustic, satirical beauty. Recall American history through its spent shell casings! Turn familial ghosts into art valuable for generations! In these fully charged poems, James Cagney storms through American fields blooming with artillery and anger on his thirsty quest for love, peace, and acceptance, in the smallest, most precious gestures.

James Cagney is poet and the author of Black Steel Magnolias In The Hour of Chaos Theory, (Nomadic Press, 2018), winner of the PEN Oakland 2019 Josephine Miles Award. His second collection, Martian: The Saint Of Loneliness, (Nomadic Press) was awarded the 2021 James Laughlin Award. James is a Cave Canem fellow who lives in Oakland.

Jennifer Lewis is a writer, editor, and the publisher of Red Light Lit. Her debut short story collection, The New Low, will be released in 2022 by Nomadic Press, where her short story, “New Low,” was the winner of the Bindle Award in 2018. In 2020, she won the Los Angeles Review Flash Fiction award for “Put a Teat in It.” She received her MFA in creative writing from San Francisco State University in May 2015. She teaches at The Writing Salon in San Francisco.

Stephen Meadows is a Californian of Ohlone Indian and pioneer descent. His work has appeared most recently in the anthology, “The Dirt is Red Here” from Heyday Books in Berkeley California. Ten of the seventeen poems found here have been previously published and one of his poems graces a bronze plaque in the city of San Francisco. His forthcoming collection “Winter Work” wll be published by Nomadic Press in December of 2022. Stephen is a folk music DJ at KFOK Community Radio and holds a Masters Degree from San Francisco State University. He lives with hls wife and son in the foothills of the Sierra Nevada.

Nomadic Press is a 501(c)(3) non-profit publisher that supports the works of emerging and established writers and artists. Through publications, events, and active community participation, Nomadic Press collectively weaves together platforms for intentionally marginalized voices to take their rightful place within the world of the written and spoken word. Through its limited means, we are simply attempting to help right the centuries’ old violence and silencing that should never have occurred in the first place and build alliances and community partnerships with others who share a collective vision for a future far better than today.