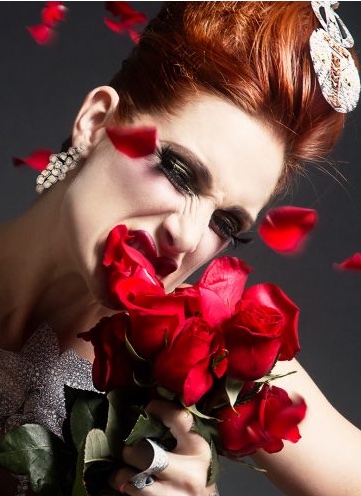 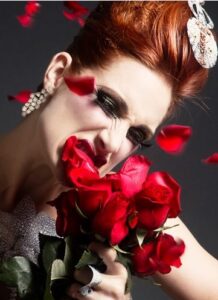 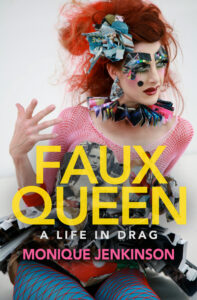 Join Monique and Friends in an evening of frolic and celebration. Celebrating the launch of her new book Faux Queen, following the fierce and fabulous journey of Fauxnique, the first cis-woman to win a major drag queen pageant.

Monique Jenkinson and Friends celebrating the launch of

Faux Queen follows the fierce and fabulous journey of Fauxnique, the first cis-woman to win a major drag queen pageant. Join Monique and Friends in an evening of frolic and celebration. A series of live performances will be followed by a book signing.

Faux Queen: A Life in Drag is a memoir about how a little Ballet-obsessed girl moved to San Francisco from the suburbs and found her people at the drag club. It joyously chronicles Monique Jenkinson’s journey through one of the most experimental moments in queer cultural history and her rise through the nightlife underground to become the first cisgender woman crowned as a pageant-winning drag queen. Jenkinson finds authenticity through the glee of drag artifice and articulation through the immediacy of performing bodies. She pens a valentine to gay men and their culture while relaying the making of an open-minded feminist. Faux Queen finds deep healing in irreverence and posits that it might be possible for us to come together in glorious difference on the dancefloor.

Monique Jenkinson is an artist, performer, choreographer, and writer. Lauded for a “campy, intellectual juxtaposition of pop culture and high art,” her work considers the performance of femininity as a powerful, vulnerable, and subversive act. She made “herstory” as the first cis-woman to win a major drag queen pageant and subsequently her solo performance works have toured nationally and internationally in wide-ranging contexts from nightclubs to theaters to museums—from Joe’s Pub, New Museum, and the historic Stonewall in New York City, Yerba Buena Center for the Arts, ODC Theater, The Stud, CounterPulse and de Young Museum in San Francisco, and in Seattle, Los Angeles, New Orleans, Provincetown, London, Edinburgh, Berlin, Zürich, Paris, Reykjavik, Rome, Catania, and Cork.

She has created space for kids to dress drag queens at a major museum and created college curricula. She played the DIRT (originated by Justin Vivian Bond) in Taylor Mac’s Lily’s Revenge and Eurydike in Anne Carson’s ANTIGONICK. She engaged in a public conversation with Gender Studies luminary Judith Butler and RuPaul bestie Michelle Visage within days of each other. Her memoir will be published by Amble Press in 2022.
Honors include residencies at Headlands Center for the Arts, Tanzhaus Zürich and Atlantic Center for the Arts, an Irvine Fellowship and residency at the de Young Museum, San Francisco Bay Guardian GOLDIE, and Bay Area Reporter BESTIE awards, and 7X7 Magazine’s “Hot 20.” She has been nominated for the Theater Bay Area, Isadora Duncan Dance (IZZIE), and Herb Alpert Foundation awards and has received support from San Francisco Arts Commission, Foundation for Contemporary Arts, CHIME, Center for Cultural Innovation, and the Kenneth Rainin and Zellerbach Family foundations.

“Monique Jenkinson is the Jane Goodall of drag. As Fauxnique, she has also become one of its most admired primates. This book is a profound herstory of a uniquely fabulous tribe, as well as a deep dive into how to discover, then honor, your own transcendent path. Read and learn.” —Justin Vivian Bond, Lambda Literary Award-winning author of Tango: My Childhood, Backwards and in High Heels

“I’ve read many books about drag over the years and Monique Jenkinson’s Faux Queen is officially my new favorite—and I swear it’s not just because I’m in it! Her life story in drag is unique and inspiring. She beautifully and thoughtfully describes an outrageous, provocative, and magical time in San Francisco’s drag history that’s often misunderstood in hindsight. I’m so grateful to Monique for writing this incredible chronicle of our lives!” —Peaches Christ, filmmaker and cult leader

“I met Fauxnique when I was 24 at a Gay Pride after-party and she was wearing like this, this mile-long swath of Burberry fabric fastened with like 10 belts and I remember thinking “oh shit, she must be someone important.” AND I WAS RIGHT! Over the years I would come to know her as one of the main fixtures of the latter-day “San Francisco” queer performance underground. If multiplicity is to your taste—Monique/Fauxnique can give you a FEAST. Heralding a career spanning three decades that meets at the oh-so-perilous intersections of drag, post-modern dance and performance art, feminist theory and critique, and activism, this woman is someone I hold dear as a local performance art hero and a sister who has always answered the phone whenever I called.” —Brontez Purnell, author of 100 Boyfriends

“An incredible window into the magical kiki of San Francisco’s underground drag scene. A voice that is dazzling, sassy, and philosophical all at the same time. In writing her memories, Monique/Fauxnique has gifted us a rare invitation to unlock the treasure of queer herstory through the eyes and vision of a faux queen. Taking us on a journey of ballet, punk and fake eyelashes Faux Queen is a living document of the deep connections and histories built by drag queens. I live!” —Julián Delgado Lopera, author of Fiebre Tropical

“Faux Queen is a playful, engaging, critically serious, counter-culturally crucial memoir that is full of joy – the primal joys of art-making, fandom, connecting with like-minded weirdos, finding your place in the world, and allowing your art and obsessions to lead you to it. I love this book.” —Michelle Tea, author of Black Wave, Against Memoir and Valencia