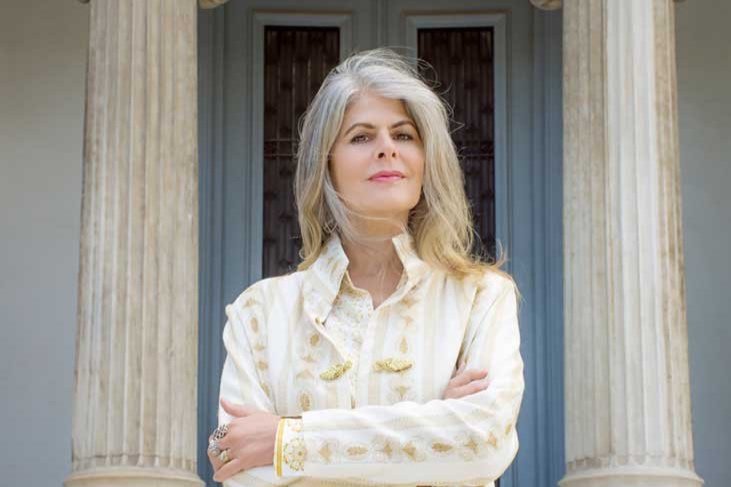 Eleni Sikelianos was born and grew up in California, and has lived in New York, Paris, Athens (Greece), Colorado, and now, Providence. She is the author of nine books of poetry, most recently What I Knew and Make Yourself Happy, and two hybrid memoir-verse-image-novels, The Book of Jon and You Animal Machine. A number of her books have appeared in French and one in Greek, and her work has been translated into many other languages. She has been at the forefront of ecopoetics and hybrid work since the early 2000s, exploring family as well as animal lineages. Her work has been widely fêted and anthologized, garnering numerous awards, including from the National Endowment for the Arts, the Fulbright Program, the National Poetry Series, New York Foundation for the Arts, Princeton University’s Seeger Center, and the Gertrude Stein Awards in Innovative American Poetry. Dedicated to the many ways poetry manifests in communities, she has taught workshops in public schools, homeless shelters, and prisons, and collaborated with musicians, filmmakers, and visual artists. She currently teaches at Brown University.

I’m on a BART train from Oakland heading to meet Elaine Katzenberger at City Lights!

This winter visit to my natal state. The green that springs up after rain in the California hills, smell of wet oak leaves. Watching a newt cross the path outside Petaluma — bright flame of its underfoot. Hearing my brother and sister-in-law singing one of my poems. Bernadette Mayer’s last book, Milkweed Smithereens. Connecting to the vast, gorgeous network of poets, writers, artists who are holding the flame.

Lorine Niedecker remains a touchstone. And biologist Lynn Margulis. So many City Lights books! Because I just saw a gorgeous big poster of it, right now I want to note Frank O’Hara’s Lunch Poems. For this book, Peter Godfrey-Smith’s Other Minds was useful, as was Darwin and a bunch of other books about our evolutionary connections with other animals. Looking at Ernst Haeckel’s illustrations and contemplating the misuse of science. Cephalopods and salamanders in general.

I am currently in love with Maricela Guerrero’s The Dream of Every Cell, in Robin Myers’ translation. Also, Jen Foerster’s The Maybe-Bird, which enacts a beautiful net pattern. Excited about the “lingual ravines” of Will Alexander’s new City Lights book Divine Blue Light. I’ve been very into Natalia Ginsburg in the past couple of years.

Oh, goodness — maybe T&G Books, after a Niedecker book — she said it stands for Tenderness & Gristle. Where? That is the question. Since we’re dreaming, why not on Crete?

Bestsellers: all of the above-mentioned writers and books, plus HD’s Trilogy, Fernanda Melchor’s Hurricane Season, Ed Roberson’s City Eclogues, so many more…