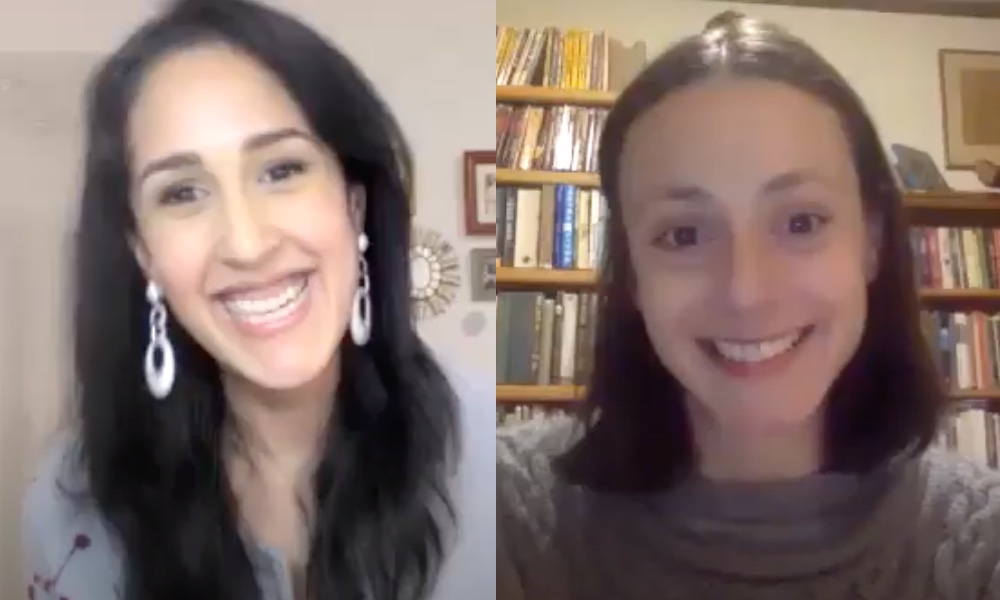 This is an excerpt of a free event for our virtual events series, City Lights LIVE. This event features Mira Sethi in conversation with Miranda Popkey, celebrating Sethi’s new short fiction collection Are You Enjoying? published by Knopf. This event was originally broadcast live via Zoom and hosted by our events coordinator Peter Maravelis. You can listen to the entire event on our podcast.You can watch it in full as well on our YouTube channel.

Miranda Popkey: I wanted to ask you about your protagonist at the end of that story [“Tomboy”]. And I won’t spoil the twists and turns that the story takes, but she has a moment with her husband, where she’s remarking on a mutual friend. And [the protagonist] describes her as “brave.” And I think that “brave” is a word that’s overused when describing works of literature, but I’m curious what it means for her, for your character, but also for you, to be publishing work that is quite daring and that is really trying to paint a picture of different pockets, different communities, in Pakistan that we ignorant Americans may not be familiar with.

Mira Sethi: Miranda, thank you so much for asking that. And I’m not just saying this because I’m in conversation with you, but this has to the most thoughtful question I’ve been asked about my book, because a lot of the questions I’ve been asked so far have been about Pakistan and politics, and we’ll get to that. That’s also very important. But thank you for asking that.

As far as my protagonist–without giving too much away–she calls the other lady “brave,” because that other lady is living life on her own terms. And it’s not easy to live life on your own terms in a country like Pakistan, even if you have a lot of privilege, because of issues around sexuality and the often burdensome imperatives of family and your clan or your tribe and your parents. And then the larger superstructure above that, which is the state and the things that trickle down from the state. So my character says [the other woman] is brave because she, herself, is living this dual life and she hasn’t yet been able to come to terms with what it is that she wants. Although this, I imagine, is a turning point for her.

And for me, yes, I did think a lot about what the repercussions might be for writing about queer lives in Pakistan. But, you know, I’m in my thirties now, and I believe very strongly in a certain set of principles. I’m an outspoken feminist in Pakistan. That sometimes gets me into trouble. And I am going to write the things that I know and I love deeply. This book actually comes from a place of fierce love, and trauma and heartache and comedy, but mostly it comes from a place of love. And buttressing my fear is my love for people who are struggling to live life on their own terms. And so I wrote this hoping that if there are–I know I have so many queer friends in and out of Pakistan–I’m hoping that maybe if they read this, they can glimpse their lives and feel seen, because fiction is ultimately the desire to write, the desire to be seen fully.

Miranda Popkey: Absolutely. I completely agree that it’s hard to imagine a life that you have not seen represented. And I think that’s the experience that your protagonist is having. In that moment, she’s seeing the life that she wishes she could live. Instead, as you say, she’s living sort of a double life where she’s married, but she does have queer desires.

Mira Sethi: Absolutely. And I didn’t just struggle with this. I was kind of petrified while writing some of these, and not just “Tomboy” but also the title story, “Are You Enjoying?”because it’s about infidelity, a love affair, an illicit relationship, a taboo relationship.

So I’m writing about sex, you know? Yes, I worried a lot about that. I’m worried about if somebody screenshots a really vivid passage and then says, “Look at her. She’s spreading vulgarity.” I mean, this is something I deal with in my life as an actress as well. But yes, at the level of the sentence, it’s definitely something I think about, but I didn’t ever let that stop me from saying what I wanted. And in many ways, Miranda, I think it actually makes you more creative. I am not wishing censorship upon anyone. God knows, when there was censorship in Russia, people still wrote. There is a ton of censorship in Pakistan, and we still manage to tell stories. And it’s not great, but it does force your most creative instincts out of you in a way that when you can say things very openly and very clearly, the mind isn’t concentrated. It leads to a certain concentration of the mind when you’re forced to say things in code. And I did for “Tomboy” a little bit.

Mira Sethi: May I tell you a cute little story? So I wrote this story, which had a very different shape and form, literally three weeks before I submitted it to my editor. And I showed it to a friend who was queer. And she said to me, very politely, she said, “You know, Mira, I love you, and you’re a great writer, but you’re not queer. And you’re writing this queer story from the point of view of queer desire.” My protagonist in the early drafts would look at women in a certain way. And she said to me, “You’re great, but this is not working. You don’t know what queer desire is like, so don’t try and enter that consciousness. But you do know about patriarchy. So why don’t you reframe this story from the point of view of patriarchy.”

And man, that was such a hallelujah moment, because I was really struggling with the story in the early drafts. And then as soon as she said that, I was like, “Oh my god, yes.” This was actually reading as comic writing, because I don’t know about queer desire. And then I reframed the whole story. And it was a real breakthrough moment for me, because then the story just ran when I started reframing it from the point of view of patriarchy.

Miranda Popkey: Well, I’m glad that your friend gave you this wonderful piece of advice.

Can you talk about your editing and revision process?

Mira Sethi: Oh my god. The most false thing about becoming a writer is that you have a book and you get to show off your book, and nobody talks about how much real writing went into it. I mean, I’m practically tripping over my words right now because I rewrote the shit out of all of these stories. And the writing takes you to places that you hadn’t anticipated.

I often say that I think in order to write. The writing is what tells me what it is that I think. So after I’ve written the thing, I know what it is that I think. So the editing process works like this: I write something. It’s very raw. I’m actually not self-conscious when I start writing, because I know it’s vomit. And I know there’s nothing to be done with the vomit, you just do it. And then later on, you can go and clean it, but it gives you something to work with. And so I write, and then I clean it up, and then I think around draft fifteen, I show it to my editor. It takes at least fifteen drafts. And then they say “Okay, you’ve got a scaffolding, but where is this going?” So I’ve worked on these seven stories for five years. That’s a long time for seven stories. It’s almost a story a year. Writing is really quite grueling.

Miranda Popkey: I agree. My joke about my first novel, my only novel, is that I had to think about it for twenty years before I could write any of it.

Mira Sethi: And you said that in your acknowledgments as well, which I actually really appreciate.

Miranda Popkey: Are you the kind of writer who plans it all in advance or are you one of those who need to surprise themselves and somehow, through the writing itself, the ideas emerge?

Mira Sethi: It’s the latter. It’s exactly what you said. I don’t think, in order to write, I write so that I may know what it is that I’m thinking. And I don’t plan in advance. And honestly, this is not a critique of writers who plan in advance. I can’t relate to it at all, because so much of the beauty of me writing fiction is discovering things that I didn’t know. For instance, my take on identity politics. Yes, of course, I’m progressive, and I have a take. But it was only after writing this book that I really understood what I felt about the world. And I think that is one of the most beautiful things about writing fiction. There is a kind of slow dredging up of your subconscious. And then you’re like, “Oh, this is what I think about this issue.” It’s really quite amazing.

Miranda Popkey: I completely agree. I write in large part to figure out what it is that I think and when I get the words on the page, I know if they’re right, and I know if they’re wrong, and if it’s just a thought it’s much vaguer.

What advice do you have for aspiring writers?

Mira Sethi: If it consumes you, you’ll probably end up doing it. Because I find that is the case with most writers.

Purchase Are You Enjoying? from City Lights Bookstore.