The Motor of the Essay: Rachel Kushner in Conversation 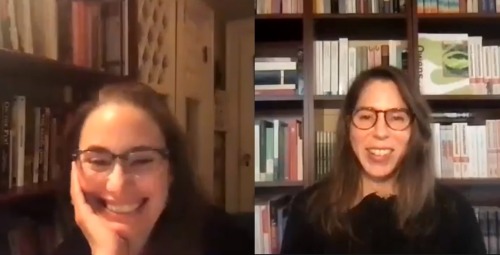 This is an excerpt of a free event we held in conjunction with Litquake for our virtual events series, City Lights LIVE. This event features Rachel Kushner in conversation with Dana Spiotta celebrating the launch of The Hard Crowd: Essays 2000-2020, published by Scribner. This event was originally broadcast live via Zoom and hosted by our events coordinator Peter Maravelis. You can listen to the entire event on our podcast. You can watch it in full as well on our Youtube channel.

Dana Spiotta: I know that everyone’s going to ask you these questions about writing fiction versus nonfiction. And I read somewhere that you said, with your novels, you begin with imagery more than an idea or a character. With the nonfiction, there is a range of pieces about writers and specific books to journalism–like the prison story and Palestine–and then there’s the ones that are personal essays, right, like the girl in a motorcycle. So I guess they might all have different origins. But where do you begin with that? And how is that different as a process from what you write in fiction?

Rachel Kushner: Yeah, so it is kind of a different process for me, although I sometimes feel guilty to try to make declarations about which is harder, or how one does one thing, because you know, for some people, the essay is what literature is.

For me, fiction is more difficult. And so in a certain way it’s what I’ve signed on to do with my life, because the process can be so mysterious and fickle and unreliable. And I’m waiting to catch a wave, or get the drift and then try to figure out how to sustain it, and then how to change it in order to sustain it. Managing so many different things at once is a very curious hermeneutic, because you need to know where you’re going.

But then you also need to let happenstance inform you. I think some of the ways that we are challenged, and how we learn in our lives and also as writers, are by having encounters that we did not anticipate or predict, and that happens in fiction. And then you’re kind of in a “taking mode” and you know exactly what’s for you and you go with it and you run.

Essays are a little different for me. I mean, obviously. Time is shorter. But usually the motor of the essay is a sprung sentence. I come up with one sentence that is doing something in the syntax and it’s making something sort of declarative. And it’s kind of a gambit. And it needs to be followed by another. And sometimes I’ll have a whole paragraph like that. And those paragraphs will just be floating in the void of the potentiality of the essay that I haven’t written yet. And I don’t sweat, like, “How am I going to link this to that?” yet. Because I just know by instinct that they’re both going in. And if I put them in the essay, then they are interrelated by virtue merely of their proximity to each other. Then I start to build links.

Some journalism is a very different process. Like you mentioned, for the piece that I wrote, originally for the New York Times Magazine, about prison abolition and the carceral geographer, Ruth Wilson Gilmore, they said it can be any length and made it long. So you know, it was like 20,000 words. And it was my version of that essay, and it probably was a pretty good essay. But I think the weakness in it was that I was not speaking to their audience. And they really–you have written for the New York Times Magazine–they want to be able to countenance everything you say, sentence by sentence. It’s not like writing an op-ed, where you just say your thing and then people can fight it out in the comments. They want to be fully on board. And I wouldn’t want to have to do that all the time.

It’s extremely difficult, because you have to keep remembering how to bring in somebody who may have wildly different ideas about how society should be organized, and not seem polemical, not seem pushy. It’s a kind of seduction I think that really benefits from collaboration with an editor. It’s arduous, it takes time. That essay took two years to write, but because the subject matter was important to me, ultimately, I decided it was worth it.

Dana Spiotta: Yeah, it’s such a great essay. And I learned so much from it.

Peter Maravelis: When you’re writing about events and feelings from decades ago, how do you return to the experience? What takes you back?

Rachel Kushner: That’s a really great question. So, you know, with some of these essays, like the first essay in the book called “Girl on a Motorcycle,” which is about the Cabo 1000–a no longer existent, illegal motorcycle road race where you span the Baja in the course of a day–was the first thing that I ever published and I wrote it 20 years ago. And after looking back over it, in order to put it in this book and to improve upon it, I opened it up; I wrote a new beginning and a new ending. There are so many details and scenes in that essay that I never, ever would have remembered had I not written them down when I was much closer to the meat of that experience.

But there are other essays like the title essay which I just wrote quite recently. I’d put the book together, and I knew it was going to be called “The Hard Crowd.” And then I just basically sat down and wrote this essay. And I think, you know, as maybe you’re telling a story, or going through your life, sometimes things really do sort of trigger the release of a memory. And Proust has this conception of two different kinds of memory that he calls voluntary memory and involuntary memory. And voluntary memory is the kind of fixed story that you tell, you know, “Oh, he’s telling that story again,” meaning it’s a kind of sclerotic, hardened account that, for Proust, doesn’t really have any real artistic or intrinsic wealth to it. Whereas involuntary memory is maybe when you would smell a perfume that you haven’t smelled in 30 years and it reminds you of this or that. And I think that writing itself can activate involuntary memory, because you start to see into spaces you haven’t seen in a really long time.

Like when I was writing this essay, I somehow ended up talking about Terence McKenna, and remembered that I’d seen Terence McKenna give this lecture at the Palace of Fine Arts. And then I saw the Palace of Fine Arts and him on the stage and where I was sitting, and who was in the audience. And so then I mentioned in the essay that this noise musician who I don’t know, but I knew who he was, was sitting right in front of me. And that was a funny thing because the New Yorker called him and asked, “Were you at a Terence McKenna lecture in 1991.” “Yeah, I was.” I mean he probably thought like the FBI is after him or something. I can start to see things and details in pretty haunting detail, particularity once I’m starting to build the framework that will allow those kind of involuntary memories to come up to present themselves.

Peter Maravelis: Do you feel that maybe kids who grew up in a certain era share communal memories, like growing up in San Francisco in the 70s is full of shared moments and scenes?

Rachel Kushner: Yes, I do feel that, but I would maybe even particularize it to not just an era, but to kids who grew up in a certain world within San Francisco. And I’m going to just be blunt: it’s the kids who went to public school in San Francisco in the 70s and 80s. We all traversed a world together, and the particularity of that world. I’m not saying that it’s special or different. Everybody has a world that they traversed, and that stays inside of them as memory. And ours is ours. And those who experienced it do feel bonded, I think, for life, in a way. And it’s something I’ve thought about a lot since that essay was published in the New Yorker because of the number of people who reached out to me and wanted to talk about their own memories of this same world that we shared.

Peter Maravelis: In the New York Times review, Dwight Garner mentioned the phrase: “At the party, she was kindness in the hard crowd,“ from the Cream song “White Room.” Is that in fact where your title came from?

Rachel Kushner: It is. I mentioned that in the title essay, it all becomes clear, or at least somewhat clear where I heard that song, and why I made it the title of this book. It’s a good line.