In the fall of 2000, San Francisco was in the throes of a dramatic urban transformation. That November, voters would choose between a pair of ballot initiatives with competing views on how best to manage the housing crisis being generated by the “dot.com boom.”

In the Mission District, neighborhood activists, artists, and local politicians joined forces as the Mission Anti-Displacement Coalition, which threw its support behind Proposition L. The San Francisco Print Collective [SFPC], a group of silkscreen artists from the legendary Mission Gráfica printshop, created a series of vibrant campaign posters. When friends at the SFPC reached out, City Lights offered our building as a site for their visual campaign. Within days, a banner with a literature-themed message in support of Prop L was hung on the bookstore’s façade, and the seeds of a fruitful collaboration were planted. 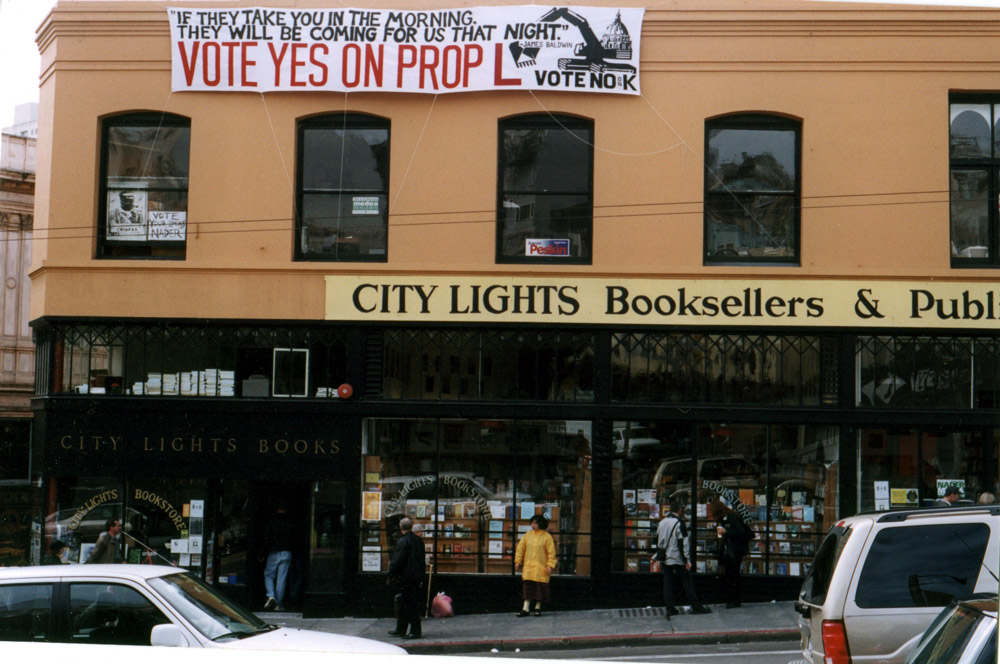 A year later, City Lights was in the final stages of preparation for a public event to celebrate our status as San Francisco’s newest Cultural Landmark. Permits to block traffic on Columbus Avenue and erect an outdoor stage were in place, along with an impressive roster of speakers. But when the attacks of 9/11 created a general state of alert, the decision was made to postpone any plans for a public gathering. We settled on a Sunday afternoon at the end of October.

The U.S. was quick to announce plans for a military retaliation, and the government rolled out a domestic propaganda campaign featuring the motto, “United We Stand.” The American flag was deployed as a symbol of patriotic loyalty, and President George W. Bush declared in no uncertain terms, “Either you are with us, or you are with the terrorists.” Throughout the country, and even in liberal San Francisco, it became dangerous to challenge the wisdom of a bombing campaign — any dissent was deemed traitorous.

At City Lights, our plans for a public celebration were immediately transformed by the imperative to mount a bold defense of free speech. In collaboration with our friends at the SFPC, we conceived a plan to transform the City Lights building itself into a site for dissent. On the morning of our landmark celebration event, San Francisco awoke to a defiant reminder that “Dissent is NOT Un-American!”

That 5-panel banner installation was the first in a series of collaborations with the SFPC, followed by a period during which Lawrence Ferlinghetti used the second-story windows of City Lights as a site for his own hand-painted messages in response to current events. In 2016, City Lights inaugurated a new banner series with new collaborators, and we intend to continue activating our building as a public platform, a forum to inspire and provoke thoughtful civic engagement. 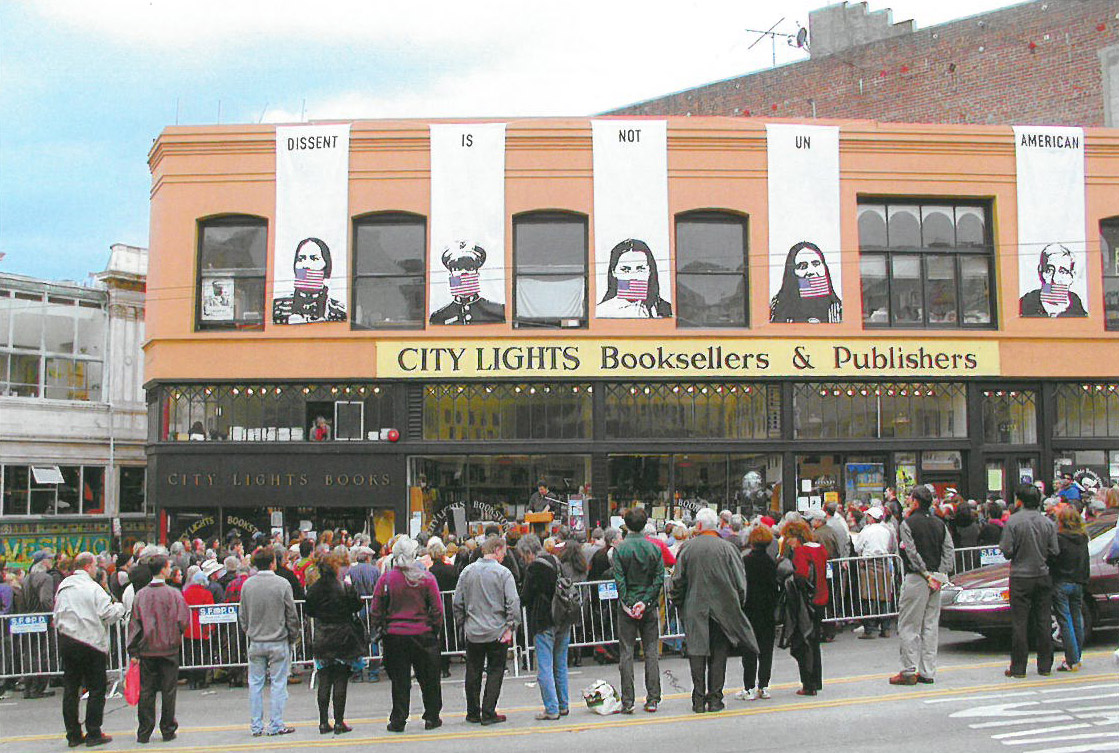 “Dissent is Not Un-American” 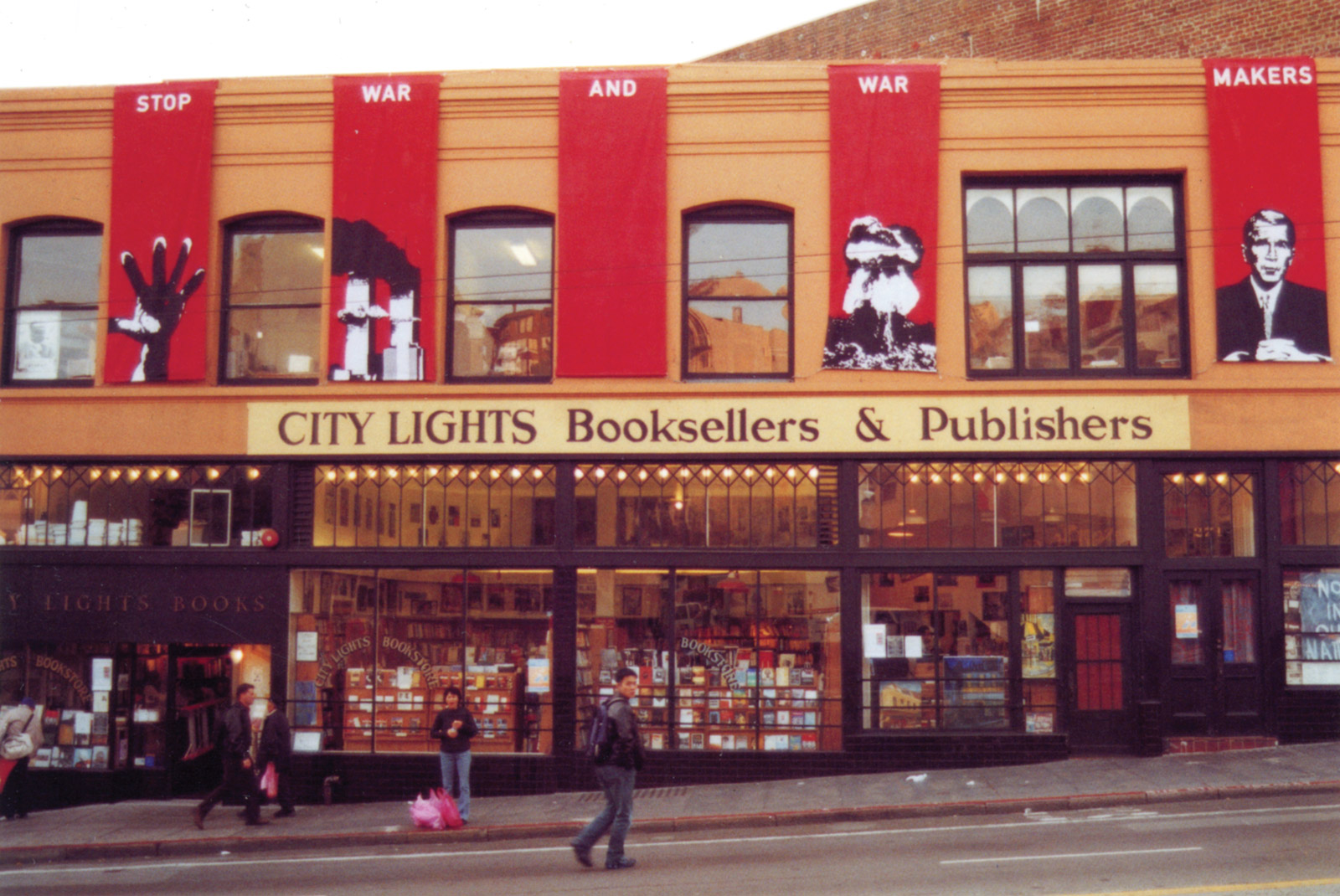 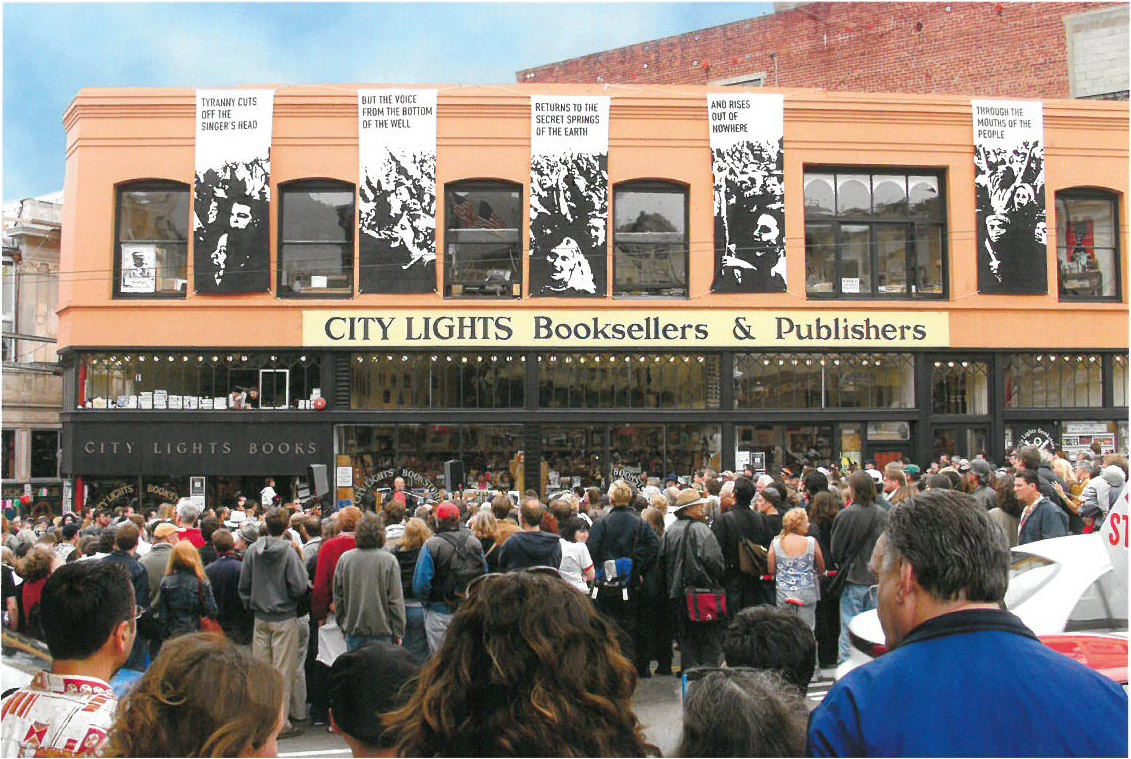 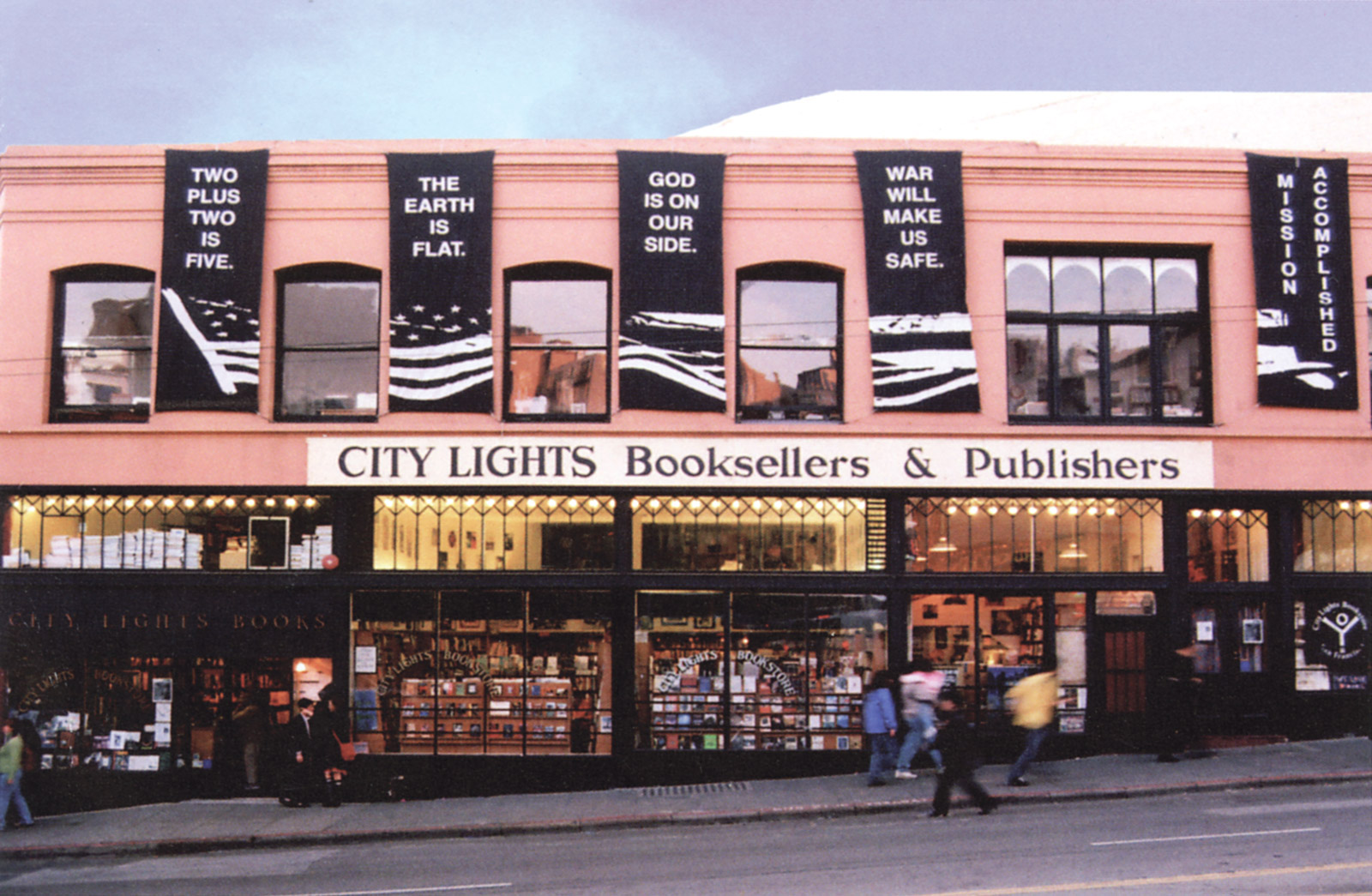 “Two Plus Two is Five / The Earth is Flat / God is on Our Side / War Will Make Us Safe / Mission Accomplished.” 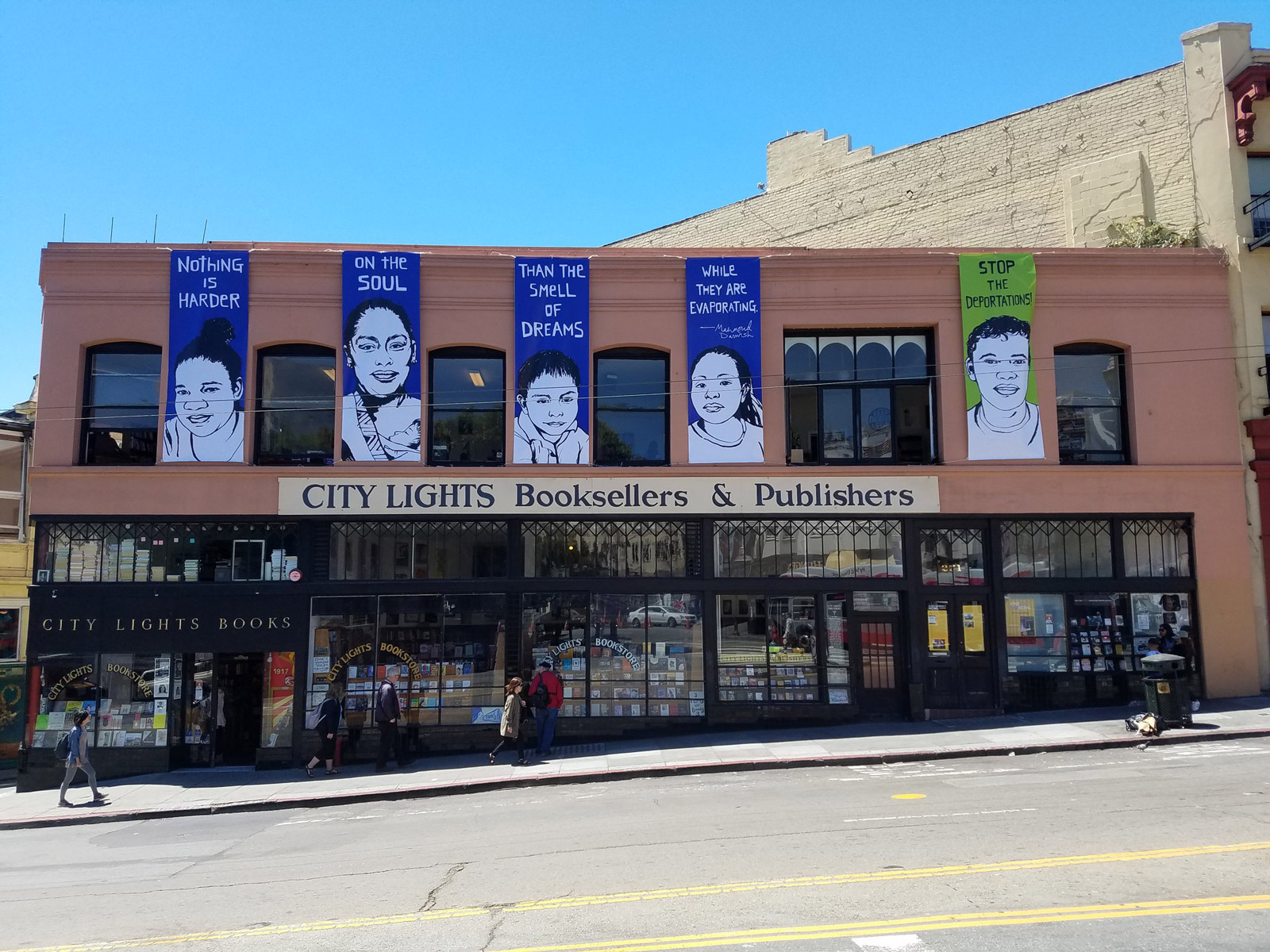 “Nothing is harder on the soul than the smell of dreams while they are evaporating.” / Stop the deportations! 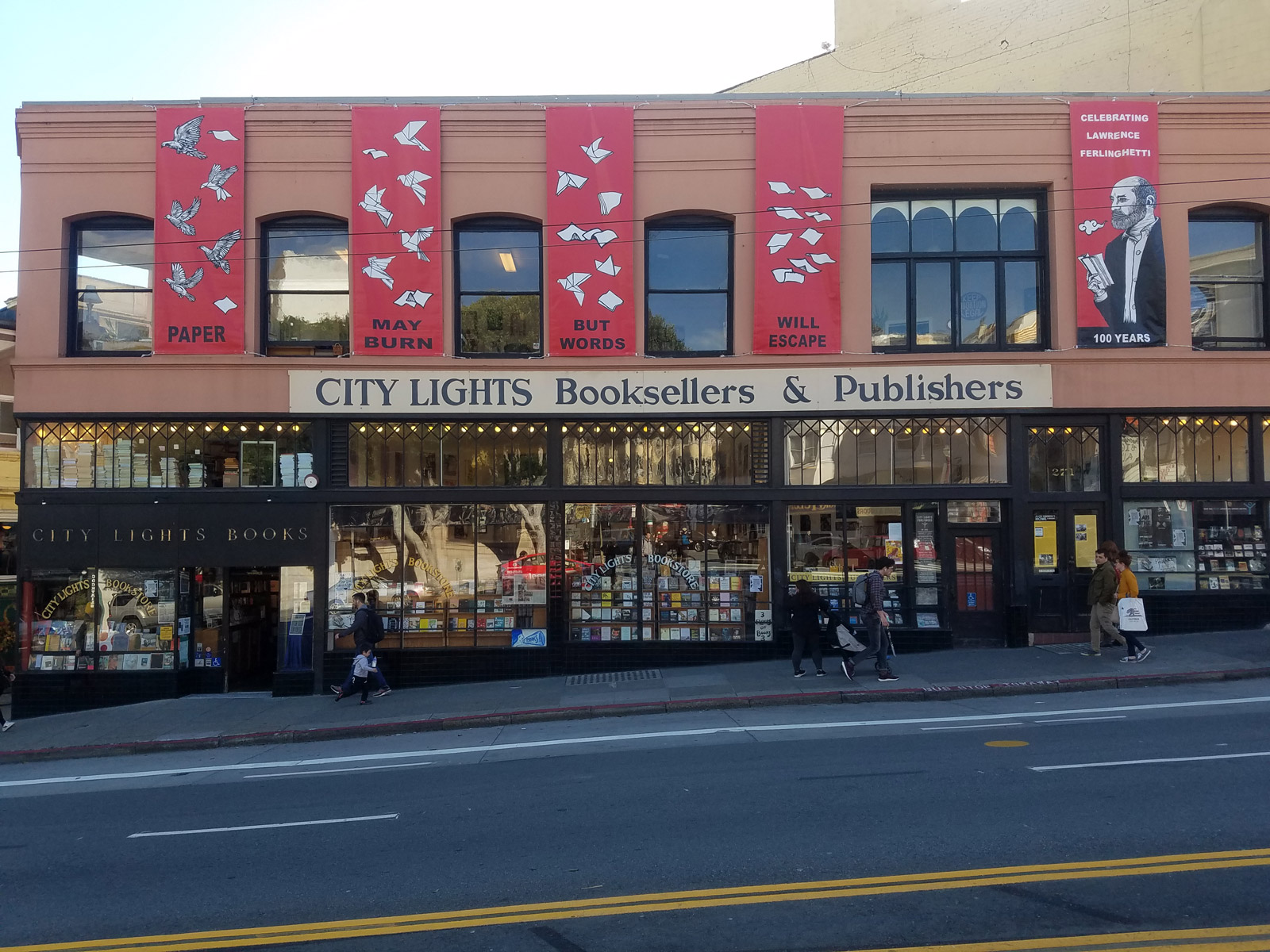 “Paper may burn but words will escape.” 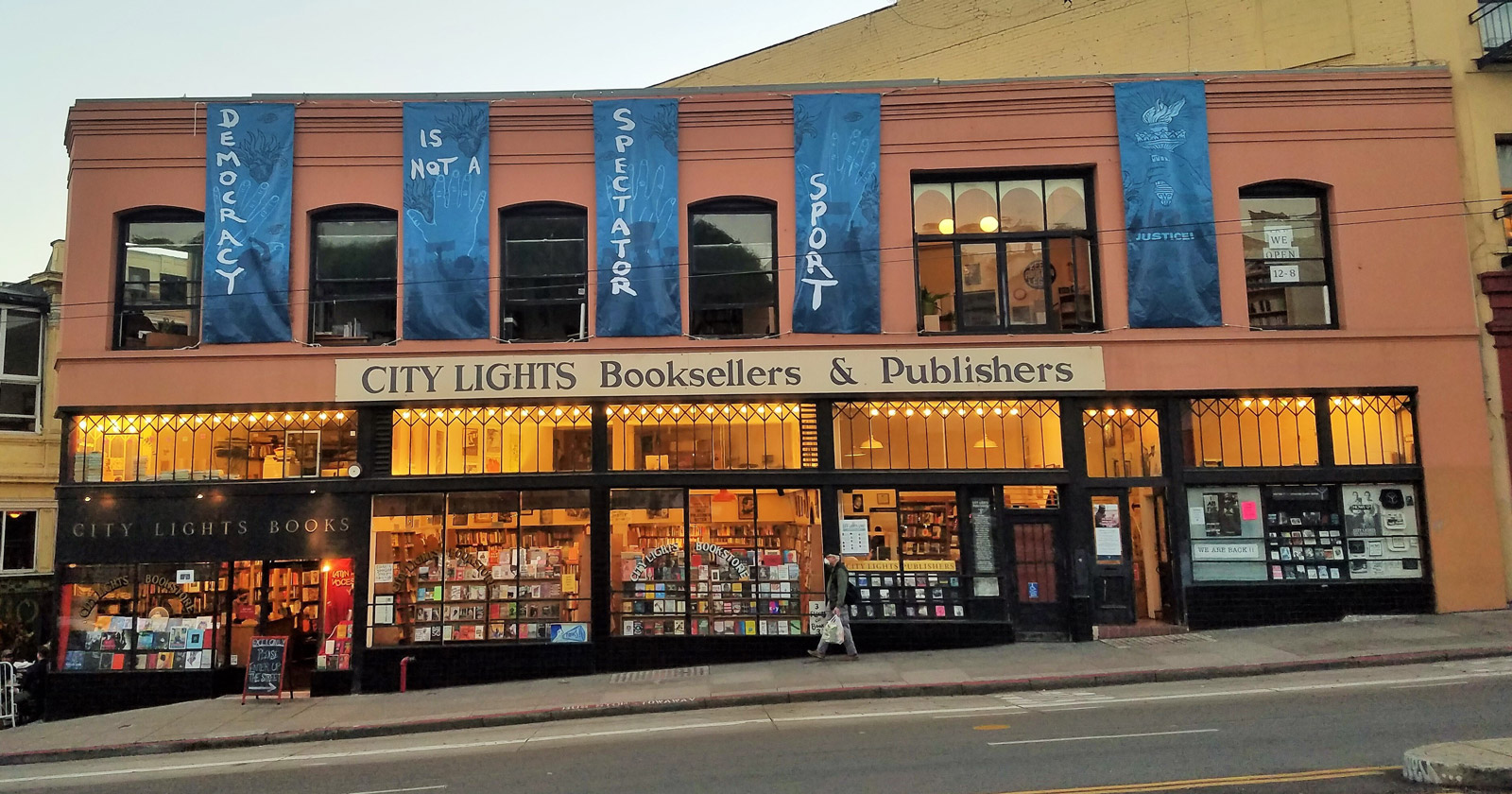 “Democracy is not a spectator sport.”