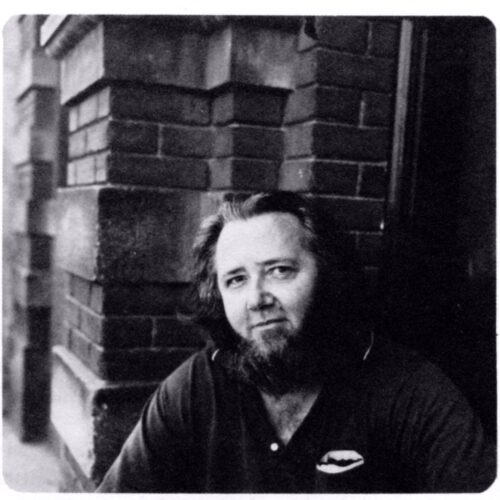 City Lights has just released Get the Money!, a monumental event in American poetry that brings together the essential prose of New York School poet Ted Berrigan. For those not familiar with him and his work, briefly stated, Ted was born in Providence, RI in 1934. He enlisted in the Army and deployed to Korea at the tail end of the Korean War; he was later stationed in Tulsa, OK, where he attended the University of Tulsa on the GI Bill. He also met then-high-school-aged Ron Padgett, Dick Gallup, and Joe Brainard, with whom he formed the core of what became known as the Second Generation of the New York School.

Ted moved to New York City in 1961 and published his best-known work, The Sonnets, in 1964, by which time he’d also begun his mimeo periodical, “C” Magazine and been accepted among the New York School poets. He’d also met and married his first wife, Sandy Berrigan, with whom he had two kids, David and Kate. He would then lead a peripatetic life as a visiting poet at various colleges and universities. During this period, he met and later married Alice Notley, with whom he also had two kids, Anselm and Edmund. By the mid-’70s, the family had moved back to New York City, where Ted became an Apollinaire-like influence on countless younger poets. He died in 1983.

A little more than 30 years later, Ted had long since ascended into legend, rightly considered one of the most significant American poets of his generation. His Collected Poems had been edited by Alice, Anselm, and Eddie and published by the University of California, fittingly in the same series as the collected poems of his hero, Frank O’Hara. I was in NYC having dinner one night with Anselm, whom I’d published in the City Lights Spotlight series a few years earlier. Naturally, my ears pricked up when he mentioned that he and his mom and brother (later to be joined by Nick Sturm) were trying to gather all of Ted’s prose with an eye toward publishing a collection. California had stopped acquiring poetry-related titles by then, so I told Anselm when they had a MS, to send it my way to see whether I could get it published by City Lights.

About five years after that, I received an email from Eddie, asking me if I wanted see the MS. By this time, I’d also published him in the Spotlight series, and I’d even made a pilgrimage to Paris for a memorable lunch with Alice, so I guess I was too deep to turn back. Curiously enough, I hadn’t read much Ted at this point, enough to get by as a poet, but otherwise I’d avoided him, because I didn’t want it to interfere with my friendship with Anselm, and later with Eddie. It took me years to work up the nerve to watch the video to “Waiting on a Friend” by the Rolling Stones, though they’re practically my favorite band, because Anselm is in it, as a young street urchin running around St. Mark’s Place. We’re the same age, and I can’t imagine him watching footage of me from the same day in 1981. I was probably being chastised by a nun! (My Boston Irish childhood was likely more like Ted’s than like Anselm’s.)

I don’t recommend deliberate ignorance as an editorial policy, but in this particular case, it paid off, in the sense that the majority of Ted’s work was still new to me, generating that excitement of first contact that sustained me during the daunting task of turning a thick MS into a book. Due to the supply chain situation, we had to accomplish a great deal in a short amount of time, and I had more than one seven-day workweek in the process. But Ted is powerful stimulant, and it was impossible not enjoy myself whenever I was working on his stuff.

Get the Money! is an endlessly fascinating volume. Like the prose of many poets who privilege the poem above all else, Get the Money! seems, at first glance, like a haphazard affair, a collection of occasional writing on art and literature, dictated by opportunity and circumstance rather than deliberate intention, largely written, as it says, to get paid, and interspersed with journal excerpts, introductions to books and readings, letters to friends, and short pieces of a purely creative nature. On one level, that’s exactly what it is. But read as a book, it far exceeds the sum of its already compelling parts. For Ted has very specific and consistent ideas, not only about poetry but also about being a poet, and these ideas animate his prose all the way through its various manifestations and two-decade arc of composition. He presents a unified aesthetic throughout and it’s impossible to overstate just how influential Ted has been to contemporary American poetry.

Much of our picture of what so-called New York School poetry is comes not directly from, say, Ashbery or O’Hara, but rather through Ted, in the sense that he elaborates his own poetics from his consideration of the first generation and from it extrapolates his own highly original poetry, while also generously sharing his insights with others. Ted figures things out and tells you about them, and perhaps every book as great as Frank O’Hara’s Lunch Poems needs someone who can tell you exactly why it is great. Without Ted, there may not have been a New York School as we know it, or else that term might just have referred to O’Hara, Ashbery, Koch, Schuyler, and Guest.

More than any other single figure, Ted is responsible for turning the New York School into a body of knowledge, some of which he explained but much of which he generated himself. Despite the random nature of his prose output, he is easily as important a 20th century poetic mind as an Olson or a Duncan, a maximus whose subject matter is not the polis but rather poetry itself. Taken as a whole, Get the Money! puts this picture of Ted Berrigan into sharp focus, and just as his expansive, post-modernist vision of poetry convinces you anything can be bent to the service of the poem, his prose teaches you to never waste the opportunity to write a “piece”; some of the most delightful things in the book are things he was compelled to write for extra-literary purposes, like the report he wrote for a seminar he co-taught about how to teach poetry to schoolkids. I envision Get the Money! taking its place alongside those essential books of poet’s prose, like Mallarmé’s Divagations (1897), as a major source of inspiration and ongoing goad to creation.

Let me end simply by thanking Anselm, Eddie, Nick, and of course Alice, for making this book and giving me a crack at it. It’s a gift to me, a gift to City Lights, and a gift to poetry itself.