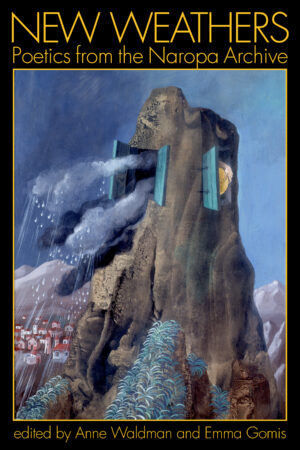 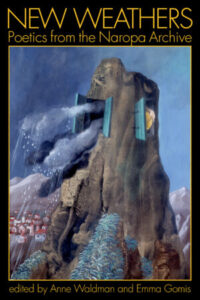 Book Launch for “New Weathers: Poetics from the Naropa Archive”

City Lights in conjunction with Naropa University and Nightboat Books celebrate the publication of New Weathers: Poetics from the Naropa Archive with Anne Waldman and Emma Gomis joined by Alan Gilbert, Cedar Sigo, and Eleni Sikelianos

An evening of reading and discussion with Anne Waldman and Emma Gomis joined by Alan Gilbert, Cedar Sigo, and Eleni Sikelianos

A collection of lectures, transcribed from the audio archives of Naropa University’s Summer Writing Program, that represent a continuing lineage of experimental literary movements. New Weathers asks us to consider how poetics might embolden deeper engagements with the world. Collected from the alternative education zone founded by Anne Waldman and Allen Ginsberg with the aim of opening up discourse and fostering political engagement, these texts invoke issues of gender and race-based injustice, the global climate crisis, and our possible extinction. They weave through our poetic community, the conversations we are having, the issues we are facing—our “new weathers” to posit strategies of resistance.

Anne Waldman, poet, performer, professor, literary curator, and cultural activist, has been a prolific and active poet and performer for many years. She is the author of the magnum opus The Lovis Trilogy: Colors in the Mechanism of Concealment (Coffee House Press 2011) which won the PEN Center 2012 Award for Poetry. Recent books include: Voice’s Daughter of a Heart Yet To Born (Coffee House 2016) and Trickster Feminism (Penguin, 2018). She was awarded the American Book Award from the Before Columbus Foundation for Lifetime Achievement in 2015. She has also been a recipient of The Shelley Award for Poetry (from the Poetry Society of America), a Guggenheim Fellowship and the Elizabeth Kray Award from Poets House, NYC in 2019. She was one of the founders of the Poetry Project at St Mark’s Church In-the-Bowery, and its Director a number of years and then went on to found The Jack Kerouac School of Disembodied Poetics at Naropa University with Allen Ginsberg and Diana di Prima in 1974 and went on to create its celebrated MFA Program. She has continued to work with the Kerouac School as a Distinguished Professor of Poetics and Artistic Director of its Summer Writing Program. She is a Chancellor Emeritus of the Academy of American Poets. She makes her home in New York City and Boulder, Colorado.

Emma Gomis is a Catalan American poet, essayist, editor and researcher. She is the cofounder of Manifold Press. Her texts have been published in Denver Quarterly, The Brooklyn Rail, Entropy, and Asymptote among others and her chapbook Canxona is forthcoming from b l u s h lit. She was selected by Patricia Spears Jones as The Poetry Project’s 2020 Brannan Poetry Prize winner. She holds an M.F.A. in Creative Writing & Poetics from Naropa’s Jack Kerouac School of Disembodied Poetics, where she was also the Anne Waldman fellowship recipient, and is currently pursuing a Ph.D. in criticism and culture at the University of Cambridge.

Alan Gilbert is the author of the poetry collections The Everyday Life of Design (Studio, 2020), The Treatment of Monuments (2012), and Late in the Antenna Fields (2011). He has earned praise for his ability to move between personal, national, and global scales and experiences in his wide-ranging, politically and ethically astute poetry. He is the author of the essay collection Another Future: Poetry and Art in a Postmodern Twilight (2006), and his critical and creative writing has appeared widely in journals such as Artforum, the Believer, BOMB, Cabinet, the Nation, and the Village Voice. Gilbert is also an art writer who has contributed catalogue essays for biennials and various group and solo shows. His honors and awards include fellowship from the New York Foundation for the Arts and a Creative Capital Foundation Award for Innovative Literature. He has taught at various institutions, including Columbia University, Sarah Lawrence College, Cooper Union, and the Naropa University Summer Writing Program. He lives in New York City.

Eleni Sikelianos was born and grew up in California, and has lived in New York, Paris, Athens, and Colorado. She is the author of nine books of poetry, most recently What I Knew (Nightboat Books), and two hybrid memoirs (The Book of Jon and You Animal Machine). Sikelianos has been the happy recipient of many awards for her poetry, nonfiction, and translations, including two National Endowment for the Arts awards and the National Poetry Series. Her writings have been widely anthologized and translated, with five books in French; ΤοβιβλίοτουΤζον was translated by ΚατερίναΣχινά and published by Patakis in 2014. She has taught poetry in public schools, homeless shelters, and prisons, and collaborated with musicians, filmmakers, and visual artists. Since 1998, she has been on guest faculty for the Naropa Summer Writing Program, and, until this spring, she taught in the PhD program in Creative Writing at the University of Denver, where she founded and ran the Writers in the Schools program. She is a Professor of Literary Arts at Brown University.

Cedar Sigo was raised on the Suquamish Reservation in the Pacific Northwest and studied at The Jack Kerouac School of Disembodied Poetics at the Naropa Institute. He is the author of eight books and pamphlets of poetry, including Language Arts (Wave Books, 2014), Stranger in Town (City Lights, 2010), Expensive Magic (House Press, 2008), two editions of Selected Writings (Ugly Duckling Presse, 2003 and 2005) and most recently the Bagley Wright Lecture Series book Guard the Mysteries (Wave Books, 2021). He has taught workshops at St. Mary’s College, Naropa University and University Press Books. He is currently a mentor in the low residency MFA program at The Institute of American Indian Arts. He lives in Lofall, Washington.

This event is made possible by support from the City Lights Foundation. Visit this link to learn more: https://citylights.com/foundation/