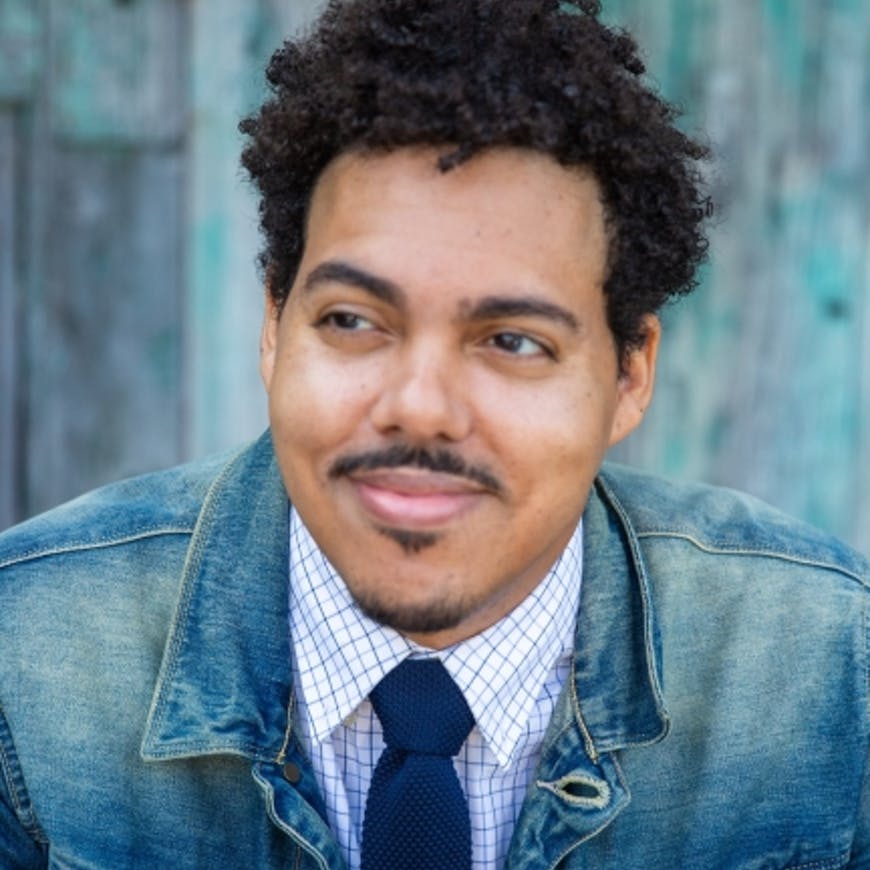 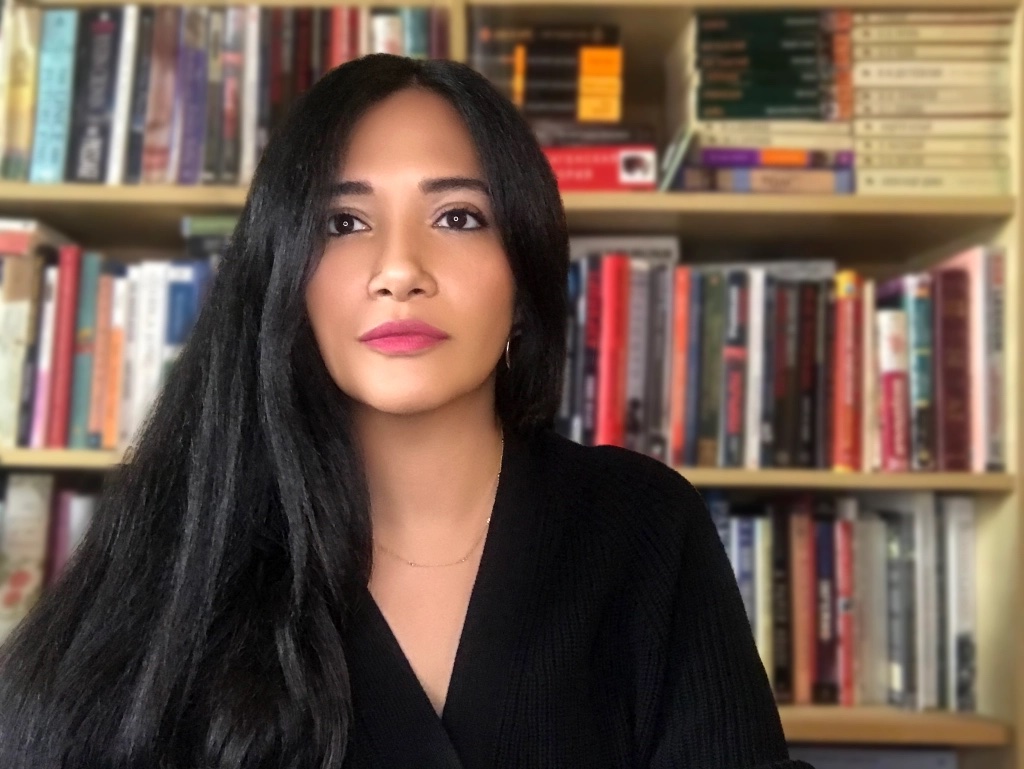 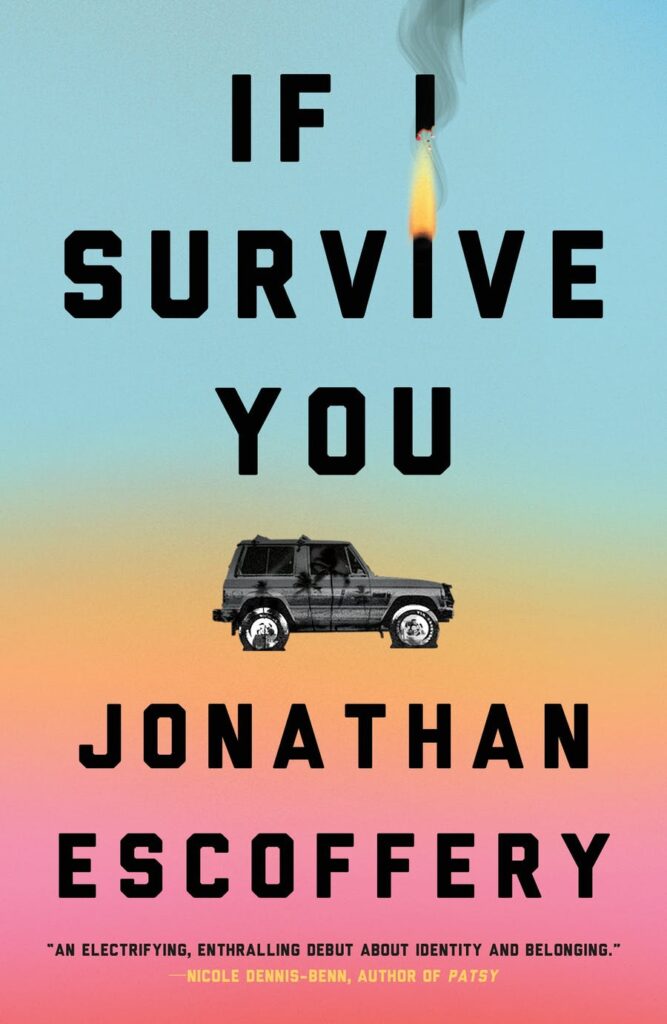 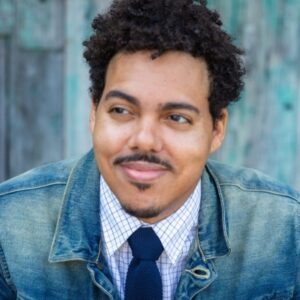 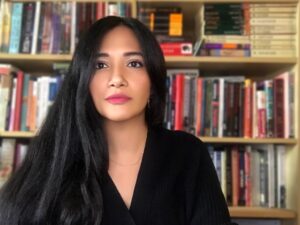 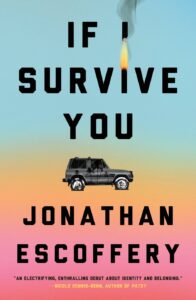 City Lights celebrates the publication of If I Survive You by Jonathan Escoffery published by Farrar Straus Giroux – This event will take place in Kerouac Alley, between City Lights and Vesuvio Cafe, between Columbus and Grant Avenues. It is free to the public. We highly recommend the wearing of facial covering.

If I Survive You

A major debut, blazing with style and heart, that follows a Jamaican family striving for more in Miami, and introduces a generational storyteller.

In the 1970s, Topper and Sanya flee to Miami as political violence consumes their native Kingston. But America, as the couple and their two children learn, is far from the promised land. Excluded from society as Black immigrants, the family pushes on through Hurricane Andrew and later the 2008 recession, living in a house so cursed that the pet fish launches itself out of its own tank rather than stay. But even as things fall apart, the family remains motivated, often to its own detriment, by what their younger son, Trelawny, calls “the exquisite, racking compulsion to survive.”

Masterfully constructed with heart and humor, the linked stories in Jonathan Escoffery’s If I Survive You center on Trelawny as he struggles to carve out a place for himself amid financial disaster, racism, and flat-out bad luck. After a fight with Topper—himself reckoning with his failures as a parent and his longing for Jamaica—Trelawny claws his way out of homelessness through a series of odd, often hilarious jobs. Meanwhile, his brother, Delano, attempts a disastrous cash grab to get his kids back, and his cousin, Cukie, looks for a father who doesn’t want to be found. As each character searches for a foothold, they never forget the profound danger of climbing without a safety net.

Pulsing with vibrant lyricism and inimitable style, sly commentary and contagious laughter, Escoffery’s debut unravels what it means to be in between homes and cultures in a world at the mercy of capitalism and whiteness. With If I Survive You, Escoffery announces himself as a prodigious storyteller in a class of his own, a chronicler of American life at its most gruesome and hopeful.

Jonathan Escoffery is the recipient of the 2020 Plimpton Prize for Fiction, a 2020 National Endowment for the Arts Literature Fellowship, and the 2020 ASME Award for Fiction. His fiction has appeared in The Paris Review, American Short Fiction, Prairie Schooner, AGNI, Passages North, Zyzzyva, and Electric Literature, and has been anthologized in The Best American Magazine Writing. He received his MFA from the University of Minnesota, is a PhD fellow in the University of Southern California’s PhD in Creative Writing and Literature Program, and in 2021 was awarded a Wallace Stegner Fellowship in the Creative Writing Program at Stanford University. If I Survive You is his debut book.

Yohanca Delgado is a 2021-2023 Wallace Stegner fellow at Stanford University and a 2022 National Endowment for the Arts recipient. Her fiction appears in The O. Henry Prize Stories 2022, The Best American Science Fiction and Fantasy 2021, The Paris Review, One Story, A Public Space, Story, and elsewhere. Her essays appear in TIME, The Believer, and New York Times Magazine. She holds an MFA in Creative Writing from American University and is a graduate of the 2019 Clarion workshop. She is an assistant fiction editor at Barrelhouse, a 2021 Emerging Critic at the National Book Critics Circle, and a member of the inaugural Periplus Collective mentorship program.

Praise for the work of Jonathan Escoffery

“Superb . . . If I Survive You stands out, and not only for its characters’ journeys and tender, searching themes; the collection is also a master class in technique.” —Hamilton Cain, OprahDaily  ”

Delicately crafted with irony and love, these linked stories explore the home and a sense of belonging in an age governed by the caprice of whiteness and capitalism.” —The Millions

“This compelling set of interrelated short stories . . . [offer] unique insight into issues of race and belonging . . . A revelatory work, full of a young man’s questioning and told in a distinctive voice, this contemplation of identity, culture, and race in the United States today is highly recommended.” —Library Journal (starred review)

“A sharp and inventive debut . . . [Escoffery’s] writing is clever, commanding, and flexible . . . A fine debut that looks at the complexities of cultural identity with humor, savvy, and a rich sense of place.” –Kirkus Reviews (starred review)

“[A] vibrant and varied debut . . . This charged work keeps a tight hold on the reader.” —Publishers Weekly (starred review)

“If I Survive You is a collection of connected short stories that reads like a novel, that reads like real life, that reads like fiction written at the highest level. This is a compelling hurricane of a book that sweeps the past, present and future together into one inextricable knot. This is where Jonathan Escoffery’s career begins. There are no limits to where he will go.” —Ann Patchett, author of The Dutch House

“Kaleidoscopic, urgent, hilarious, revelatory and like nothing you’ve read before. These are the stories that we never believed could be told, until Jonathan Escoffery told them.” —Marlon James, author of Moon Witch, Spider King

“An electrifying, enthralling debut about identity and belonging. Jonathan Escoffery illuminates both beauty and trauma and the ways in which so many of us Jamaicans are still looking for home within ourselves. Told with humor and clear-eyed grace, this spectacular collection introduces us to an amazing new voice.” —Nicole Dennis-Benn, author of Here Comes the Sun and Patsy

“It’s truly a feat that a book of short stories tackling such big stuff—family, love, violence, race—could be so damn funny. Jonathan Escoffery is a writer only just getting started, and his first book is a welcome reminder of what fiction can do.” —Rumaan Alam, author of Leave the World Behind

“If I Survive You is a collection of brilliant wit, real heart, and electric humor. Jonathan Escoffery masterfully mines from his life and emerges, in this debut, as a talent not to be ignored.” —Nana Kwame Adjei-Brenyah, author of Friday Black

“A magnificent debut collection. It’s astonishing what Jonathan Escoffery accomplishes in If I Survive You. These stories are told with such grace, humor, insight, and precision that readers will want to return again and again. Escoffery is a writer to watch, and we lovers of literature are fortunate to have him.” —Maurice Carlos Ruffin, author of We Cast A Shadow

“Jonathan Escoffery writes the Miami I know–where shimmering landscapes and glitzy neon give way to immigrant hustle, financial scams, and societal and family tensions gathering force quietly like the eye of a hurricane. Escoffery is a keen and witty observer with range and style. An exciting new voice.” —Gabriela Garcia, author of Of Women and Salt

“These are superb stories about identity, family and place. There is a beautiful economy in the telling that never sacrifices the depth, complexity and richness of the worlds these characters inhabit. Jonathan Escoffery’s is a strong, much needed new voice in our literature.” —Percival Everett, author of The Trees

“If I Survive You is simply one of the best debut story collections I’ve ever read. Unmistakably original, improbably accomplished, If I Survive You earns Jonathan Escoffery the attention deserved of an important new author.” —Mat Johnson, author of Pym

“Each story in If I Survive You passes a baton to the next, though it’s not for speed but for deepening. As Jonathan Escoffery’s debut progresses, the characters layer, stories overlap, voices gather and the result is a moving and layered portrait of a family, at once wise and unflinching.” —Aimee Bender, author of The Butterfly Lampshade

“Jonathan Escoffery’s brilliant first book has some new things to tell us about racial identities, loneliness, and the search for love. It is so sharp-eyed and detailed that you feel that you are living through its scenes. The book is father-haunted and often very funny, and its prose is electric with intelligence. Somehow If I Survive You manages to be scary, humorous, and heartbreaking all at once. I loved this book.” —Charles Baxter, author of The Sun Collective