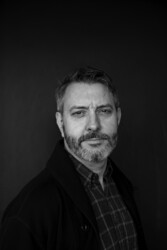 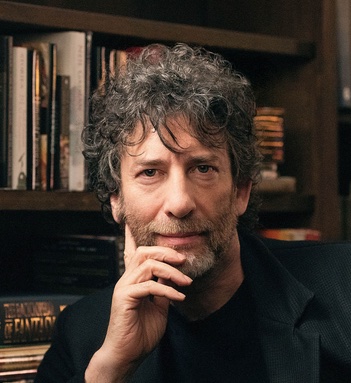 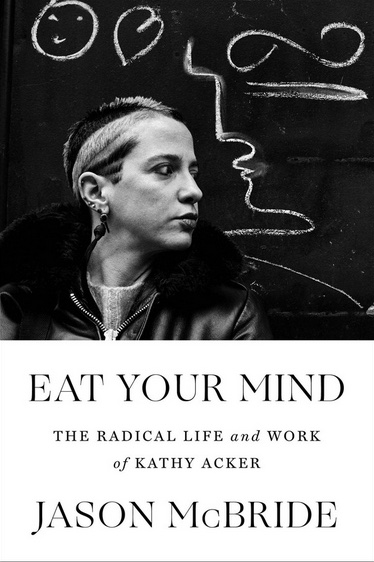 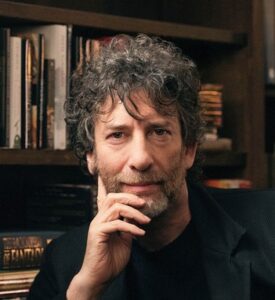 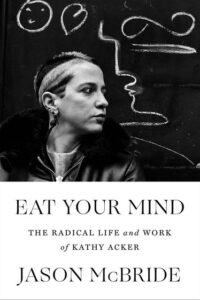 Jason McBride on Kathy Acker (in conversation with Neil Gaiman)

Jason McBride in conversation with Neil Gaiman – celebrating the publication of Eat Your Mind: The Radical Life and Work of Kathy Acker – Published by Simon and Schuster

Eat Your Mind: The Radical Life and Work of Kathy Acker

Published by Simon and Schuster

The first full-scale authorized biography of the pioneering experimental novelist Kathy Acker, one of the most original and controversial figures in 20th-century American literature.

Kathy Acker (1947–1997) was a rare and almost inconceivable thing: a celebrity experimental writer. Twenty-five years after her death, she remains one of the most original, shocking, and controversial artists of her era. The author of visionary, transgressive novels like Blood and Guts in High School; Empire of the Senseless; and Pussy, King of Pirates, Acker wrote obsessively about the treachery of love, the limitations of language, and the possibility of revolution.

She was notorious for her methods—collaging together texts stolen from other writers with her own diaries, sexual fantasies, and blunt political critiques—as well as her appearance. With her punkish hairstyles, tattoos, and couture outfits she looked like no other writer before or after. Her work was exceptionally prescient, taking up complicated conversations about gender, sex, capitalism, and colonialism that continue today.

Acker’s life was as unruly and radical as her writing. Raised in a privileged but oppressive Upper East Side Jewish family, she turned her back on that world as soon as she could, seeking a life of romantic and intellectual adventure that led her to, and through, many of the most thrilling avant-garde and countercultural moments in America: the births of conceptual art and experimental music; the poetry wars of the 60s and 70s; the mainstreaming of hardcore porn; No Wave cinema and New Narrative writing; Riot grrls, biker chicks, cyberpunks. As this definitive biography shows, Acker was not just a singular writer, she was also a titanic cultural force who tied together disparate movements in literature, art, music, theatre, and film.

A feat of literary biography, Eat Your Mind is the first full-scale, authorized life of Acker. Drawing on exclusive interviews with hundreds of Acker’s intimates as well as her private journals, correspondence, and early drafts of her work, acclaimed journalist and critic Jason McBride offers a thrilling account and a long overdue reassessment of a misunderstood genius and revolutionary artist.

Jason McBride is a Toronto based writer and editor who’s work has appeared in The New York Times Magazine, New York magazine, The Believer, The Village Voice, The Globe and Mail (Toronto), Hazlitt, and many other publications. Eat Your Mind is his first book.

Neil Gaiman is credited with being one of the creators of modern comics, as well as an author whose work crosses genres and reaches audiences of all ages. He is listed in the Dictionary of Literary Biography as one of the top ten living post-modern writers and is a prolific creator of works of prose, poetry, film, journalism, comics, song lyrics, and drama. Neil Gaiman’s groundbreaking series Sandman has collected a large number of US awards in its 75 issue run, including nine Will Eisner Comic Industry Awards and three Harvey Awards. In 1991, Sandman became the first comic ever to receive a literary award, the 1991 World Fantasy Award for Best Short Story.

This event is made possible by support from the City Lights Foundation. Visit this link to learn more: https://citylights.com/foundation/