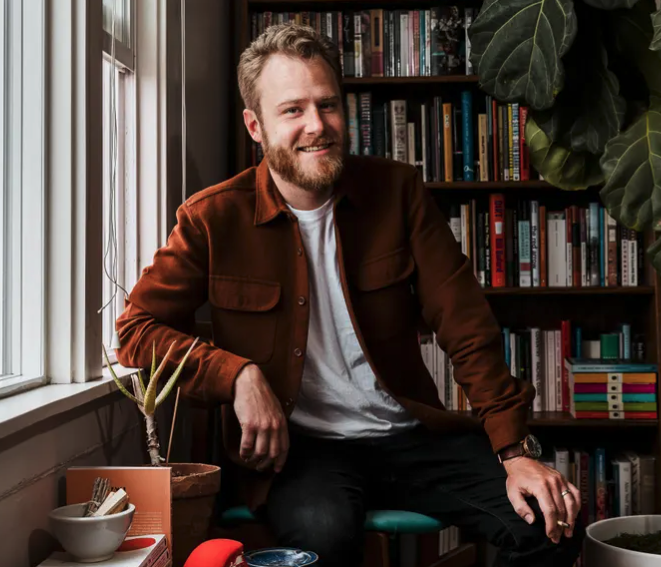 William Brewer is the author of I Know Your Kind, a winner of the National Poetry Series. His work has appeared in The New Yorker, The Nation, and The Best American Poetry series. A former Wallace Stegner Fellow, he is a Jones Lecturer at Stanford University. He makes his home in Oakland, California. His newest book, The Red Arrow, a novel, is published by Knopf.

William will be reading from The Red Arrow in our City Lights LIVE! virtual event series on Tuesday, May 17th, 2022!

Walking, running, and hiking. Time on my feet is central to my process. It’s when my imagination untangles knots, plus it’s crucial for general well-being. This was especially true during the pandemic, during which I ambulated through most of Oakland, Berkeley, and San Francisco. While I already had a deep love for this place, all that time spent wandering forged in me an especially intimate connection to the Bay that I’m not sure I’ve felt anywhere else.

I’m going to cheat and say I don’t want to own a bookstore because going to different bookstores is one of my favorite things to do and I’m guessing that if I owned a bookstore that’s where I’d have to spend all my time. As a compromise, I’ll say that I have a deep love of the old magazine stands you still encounter in NYC and Europe, and I think it’d be deeply cool to build one of those somewhere in the East Bay, except in addition to the usual magazines it would sell the expensive, impractical niche magazines I love, and then for books it would exclusively sell NYRB Classics and the UK editions of the Penguin Modern Classics, with their perfect soft blue spines. The stand would also sell Sullana cigarettes from Switzerland, espresso shots, sparkling mineral water, and half-pints of Trumer Pils on draft. There’d be a couple café tables and chairs placed to the side where people could sit and flip through their purchase while blasting a cig or sipping a Trumer and listening to good music played from a speaker at an intimate volume. You know the energy!