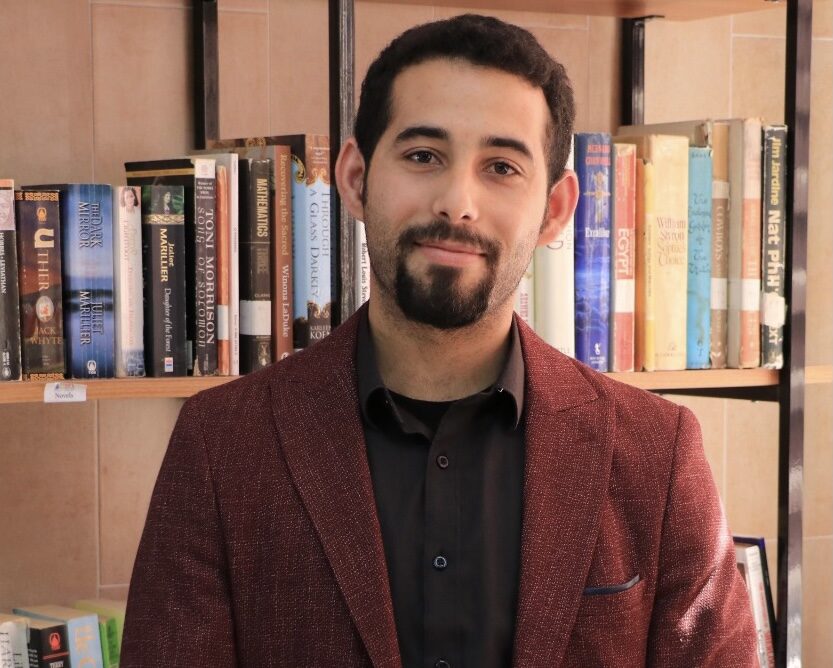 Mosab Abu Toha is a Palestinian poet, scholar, and librarian who was born in Gaza and has spent his life there. A graduate in English language teaching and literature, he taught English at the United Nations Relief and Works Agency (UNRWA) schools in Gaza from 2016 until 2019, and is the founder of the Edward Said Library, Gaza’s first English-language library. Abu Toha is a columnist for Arrowsmith Press, and his writings from Gaza have appeared in The Nation, Arrowsmith Press, and Literary Hub. His poems have been published on the Poetry Foundation’s website, in Poetry Magazine, Banipal, Solstice, The Markaz Review, The New Arab, Peripheries, and other journals. His newest book Things You May Find Hidden in My Ear: Poems from Gaza published by City Lights Books.

Mosab will be celebrating Things You May Find Hidden in My Ear in our City Lights LIVE! virtual event series on Saturday, May 7th, 2022! with special guest Mary Karr.

From Gaza, where I have lived most of my life. I’m writing to you from my home library on the second floor of my family house. Our house overlooks a wide area. Fields of lemon, orange, and olive trees. In the early morning, I can sometimes hear the waves of the Mediterranean. It’s not very far from my place.

I was in the States when the pandemic first hit. I spent around 15 months in Cambridge, MA, and Syracuse, NY. My wife and kids accompanied me during my stay. Taking care of my young family has been very important to me. I have to be their parent and their friend, their teacher and their student.

I’m used to walking, sometimes on the beach or in the street. While in the States and during the pandemic, I found strolling along empty streets in Syracuse, especially before sunset, inspiring. I created some poems during my walks there, about trees, deer, squirrels, snow, and rain.

It was never difficult for us to acclimate to the new situation: staying inside our apartment. In Gaza, where we come from, we had to remain for hours and days inside our houses during Israeli airstrikes or tank shelling. Our parents and grandparents also had to stay in their houses for days and weeks during curfews imposed the Israeli occupation. When airports were shut down, we were not affected. Simply because we don’t have airports in Palestine, not to say Gaza. We can manage not to see our families for years. In 2019, I met my aunt Alia for the first time in nineteen years. The last time she could come to Gaza was in 2000. I was eight years old at the time.

I would say that Gibran and Mahmoud Darwish influence me all the time. The stories and poems of Gibran, their lyricism, especially in Arabic, are enchanting. Darwish’s poetry and his diaries are a record of a rising star and a person committed to speak up for his people. Darwish was born in Palestine before Israel was created in 1948. At the age of six, he was expelled as a child along with his family. Then they “secretly” returned to find out that their small house had been destroyed. Darwish then lived in exile for most of his life. His poetry travelled with him. His experiences had influenced his work. And I think my life in Gaza, the wars I lived through, the siege that’s been imposed since 2007, getting wounded in the September 2008 attack, the damage to our house during the 2014 attack on Gaza, my losing of two close friends. All that influenced my work, especially this book.

I would also add that my reading of English literature, especially of the Romantic poets, has influenced my perception of poetry and things around me.

Edward Said as an intellectual and critic is an influence, too.

I’m reading Semezdin Mehmedinović’s Sarajevo Blues which the poet wrote during the siege of Sarajevo in 1992 (coincidently the year of my birth). Also I’m reading a novel titled The American Granddaughter by Inaam Kachachi, an Iraqi novelist. Hussein Barghouthi’s Among the Almond Trees is an autobiography that documents the poet/critic’s final years of struggling with cancer. He reflects on his origins, beginnings, and end. I highly recommend it.

Gibran’s The Prophet is a book I like to read and return to. I’m sure millions of people read it. Some of it was sung by Fayrouz, the renowned Lebanese singer.

I founded a public library in Gaza in 2017. I named it after Edward Said. It’s the first English library in Gaza and now has two branches. It acts more like an activity center. Many young people and children come to practice what they like: reading, writing, singing, playing music (we have a small piano and a few guitars and ouds) acting plays, and learning computer skills.

It’s my dream to open a bookstore in Gaza, preferably close to the Mediterranean. A bookstore that sells all kinds of books in both English and Arabic and to which people from all countries can come to purchase and talk about books.

A bestseller is whatever an authority says is bad. So sweet what is forbidden.

Other than that, I think whatever talks to people and their hearts will become a bestseller, even if it’s a quote on my bookstore’s walls.