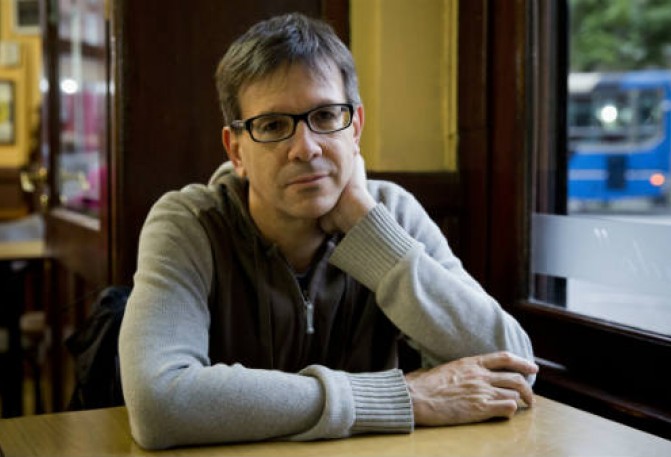 Eduardo Berti, born in Buenos Aires in 1964, is the author of a vast body of work that includes novels, stories, music writing, and various unclassifiable books. He has translated authors such as Gustave Flaubert, Jane Austen, and Marguerite Yourcenar into Spanish, and is the editor of a Spanish edition of Henry James’s Complete Stories. A member of the OuLiPo since 2014, he lives in Bordeaux.

From Bordeaux, a city in the south of France where I’ve lived for almost nine years, after Buenos Aires (where I was born), Paris (for almost a decade), and Madrid, besides some short stays in other places. I love traveling and I think I’ve found here, in Bordeaux, one of my places in the world.

Reading, writing, music, my family, and a small (and sometimes sunny) garden.

I’m reading and rereading the novels of Romain Gary and a contemporary French writer named Tanguy Viel. I always return to Italo Calvino, Nabokov, and Borges, to name a few.

I’m often influenced not only by writers but by artists from other disciplines, and by people and things in general. In the case of An Ideal Presence, nothing was stronger than my direct experience among the caregivers. But there was a book whose structure inspired mine: William March’s Company K. This book, published in 1933, gives voice to all the members of a military unit—the author’s former comrades from World War I, even those who died in combat. I took the general form of March’s book and used it to depict a completely opposite universe: a fundamentally female unit that’s the opposite of a killing machine.

I would love to open a small traveling bookstore where I could invite friends and people I love or admire to curate the books exposed in the shop window. Not only recent books, but also some beloved books they proposed. A name? Well, I hesitate between Portable Magic and A Moveable Feast.