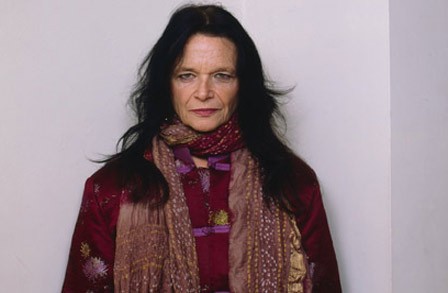 Anne Waldman is the author of numerous volumes of poetry, including the feminist epic The Iovis Trilogy: Colors in the Mechanism of Concealment, which won the PEN Center USA Award for Poetry in 2012. Other books include Trickster Feminism, Voice’s Daughter of a Heart Yet to Be Born, Manatee/Humanity, Gossamurmur, Jaguar Harmonics, and the anthologies Cross Worlds: Transcultural Poetics (co-edited with Laura Wright) and New Weathers: Poetics from the Naropa Archive (co-edited with Emma Gomis). She is a recipient of the Shelley Memorial Award, a Guggenheim fellowship, and the Before Columbus Foundation Lifetime Achievement Award, and is a former chancellor of the Academy of American Poets.

Anne will be in conversation with LaTasha N. Nevada-Diggs and Eleni Sikelianos during City Lights’s Coffee House Press Extravaganza on Wednesday, January 25th at 6:00pm PST.

I am writing from my childhood home in chilly New York, storm on the way. Gathering up my New Year’s resolutions.

What is bringing you joy personally and habitually?

What is bringing me joy right now is working on a little edition with Steve Clay of Granary Books honoring poet Lewis Warsh who passed in 2020 entitled Let Go with cover art by George Schneeman.

And also a solstice collaboration entitled Shortest Century with a wonderful younger poet Zoe Brezsny that opens with lines by Bernadette Mayer.

So the habit is poetry, memory and homage.

And working on a book for my grandchild called 13 Moons Kora and my husband Ed Bowes’ film archive. Future memory!

Which artists, writers and others influenced your life and work in Bard, Kinetic specifically?

My book Bard, Kinetic is a large compendium of memoir, memory, archive, and poetry. I am inspired by day books, journal marginalia, and off-beat writing. Influences are epic traditions, musical forms usually from Asia, Buddhism, community, conversation, nightmare, and dream. I am part of the wild mind of New American poetry and appreciate the labels of second-generation New York School, daughters of Black Mountain and the Beats.

Dolores Dorantes’ Copy, Anna Della Subin’s Accidental Gods: On Men Unwittingly Turned Divine, Maya Deren, Choreographed for Camera by Mark Alice Durant, Will Alexander’s Divine Blue Light (for John Coltrane), Cisco Bradley’s The Willamsburg Avant-Garde: Experimental Music and Sound on the Brooklyn Waterfront, Joe Brainard: The Art of the Personal by John Yau, and Audre Lorde: Dream of Europe: Selected Seminars and Interviews: 1984-1992 by Mayra A. Rodriguez Castro. I would recommend them all.

If you opened a bookstore where would it be located and what would your best seller be?

It would be a bilingual bookstore in Mexico City, Santa Maria to be a companion to other visionary arts, poetry, and dharma gatherings in the neighborhood. It would be called Kalyāṇamitra which is sanskirt for “spiritual friend.” Best seller would be Maria Sabina: Selections (University of California Press, 2003).